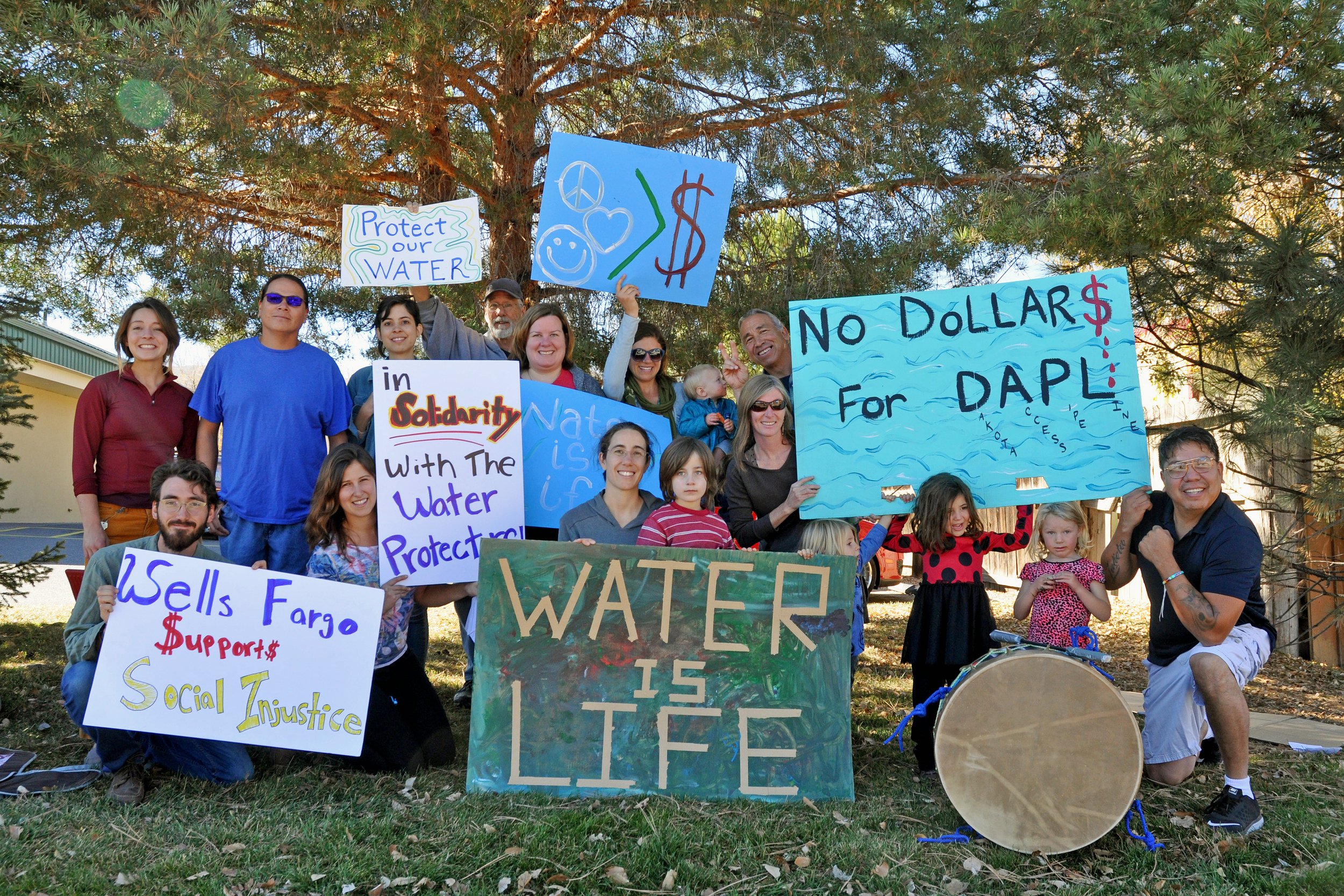 Oil is flowing through the Dakota Access Pipeline (DAPL) despite a District Court ruling in early July to shut it down. Native Americans and their allies celebrated a long-awaited victory on July 5, after four years of protest and legal battles, culminating at Oceti Sakowin Camp (Seven Council Fires of the Dakota, Nakota, Lakota tribal nations) at Hunkpapa Oyate, the Standing Rock Sioux Reservation, in the fall of 2016.

But, an appeal was filed on July 15. Energy Transfer Partners, owner of DAPL, also filed a request to stay the shut-down order until the appeal is resolved.

The Dakota Access Pipeline or DAPL transports over 500,000 barrels of crude oil a day, 1200 miles from the Bakken Shale to Illinois. Other pipelines run the oil to refineries further south.

Also at stake are clean water, sacred sites, indigenous land rights, and the National Environmental Policy Act. Daniel Paul Nelson, director of the Lakota People’s Law Project, told The Sopris Sun that the original path of DAPL would have crossed Bismarck, North Dakota, which is a predominantly white community.

“At the last minute, [Energy Transfer Partners] decided to shift the location immediately north of the Standing Rock Sioux Nation, which is about an hour south of Bismarck,” he explained.

Bismarck was worried about potential contamination of the city’s drinking water supply.

The route now takes the pipeline under the Standing Rock Tribe’s primary water supply: the Missouri River at Lake Oahe, about a half mile upstream from the reservation. “There is no other pipeline in existence that has such a long stretch where the pipe is underneath a body of water,” said Nelson. “They drill a bore through the earth and then they pull the pipe through,” he said, which can create cracks and leaks.

“Mni Wiconi” was on everyone’s lips at Oceti Sakowin camp on the banks of the Missouri River in 2016. The Lakota say that water is alive, that the river is a relative.

Water Protectors at Oceti Sakowin vowed never to allow the river to be contaminated with oil from DAPL. Thousands from around the world, including many from Carbondale, joined them. The Society for Cultural Anthropology wrote in a series on the protests that more than 300 tribes and allied organizations joined the Great Sioux Nation at Standing Rock.

On September 3, bulldozers illegally churned up sacred sites along the then-proposed pipeline route not far from camp. As protestors rushed to the scene, pipeline workers unleashed dogs on the crowd, injuring many. The sacred sites, previously off limits to non-Natives, were opened to journalists. Now desecrated, they represented ancient connections to the solar system, dating back thousands of years. The Standing Rock anthropologist was in tears as he talked about what had been lost.

The July 5, 2020 District Court ruling along with the Keystone XL Pipeline and the Atlantic Pipeline decisions the same week came as a surprise to some. Madonna Thunder Hawk, Lakota People’s Law Project staff and longtime activist from the Cheyenne River Sioux Tribe, said in a recent forum hosted by the Nation magazine, “It helped with morale but we also know that it’s an intergenerational struggle,” she explained. “We know that what this Federal government can give, can also be taken. But, we’re in it for the long haul.”

The long haul includes the struggle for land rights and tribal sovereignty. DAPL treads on land rights that date back at least to the 1851 and 1868 Treaties of Fort Laramie. Many see the pipeline as yet another in a long line of treaty violations. “This has been the standard treatment of Native Americans over the years,” said Daniel Paul Nelson.

Judge Boasberg’s order hinges on the fourth issue at stake: the National Environmental Policy Act or NEPA. In and of itself, NEPA is on the chopping block; the current administration recently stripped many of its protections. But, in the case of DAPL, it might just be the final nail in the pipeline’s coffin.

In December 2016, President Obama blocked the pipeline from crossing the Missouri River until a full environmental review had analyzed alternative routes and treaty rights. “What the Army Corps of Engineers was doing was permitting the pipeline one mile at a time,” explained Nelson. “It was basically a work around. Instead of doing a full environmental assessment, they were doing this inappropriate process of permitting.”  Hence Obama’s decision. “But, then Trump came in in January [2017] and immediately reversed that,” said Nelson.

The pipeline has been embroiled in a legal battle ever since. Pipeline construction finished in June 2017. According to Earthjustice, the Standing Rock Sioux Tribe sued over the permits and the court ruled that the environmental review was insufficient. The Army Corps redid the analysis, failed to include the Tribe in the process, and ultimately decided that the original analysis was fine. The Tribe sued again in August 2019. The July 5 decision is the latest iteration of the same lawsuit that’s been bouncing back and forth for the past three years.

Nelson sees the judge’s ruling to shut down the pipeline as heroic. “The courts have not been friendly to tribes and in some sense, we felt like we were tilting at windmills when we were trying to battle in the courts over the past three years,” he said.

Energy Transfer Partners filed a request to stay the order to shut down the pipeline. And, on July 20, the Standing Rock Sioux Tribe once again filed their opposition to the stay, pending appeal. A response is due this week.

Indigenous Youth Activist Tokata Iron Eyes, of the Standing Rock Sioux Tribe, was 11 years old when the DAPL fight began. She’s 16 now. During the Nation forum, taking a cue from Madonna Thunder Hawk, she encouraged people her age to continue the struggle. “It’s a huge sign to young people everywhere that what we are doing is working and we must keep going if we want to see the change happen,” she said. “The power belongs in the hands of the people.”