UpRoot gets local produce to pantries and limits bear encounters 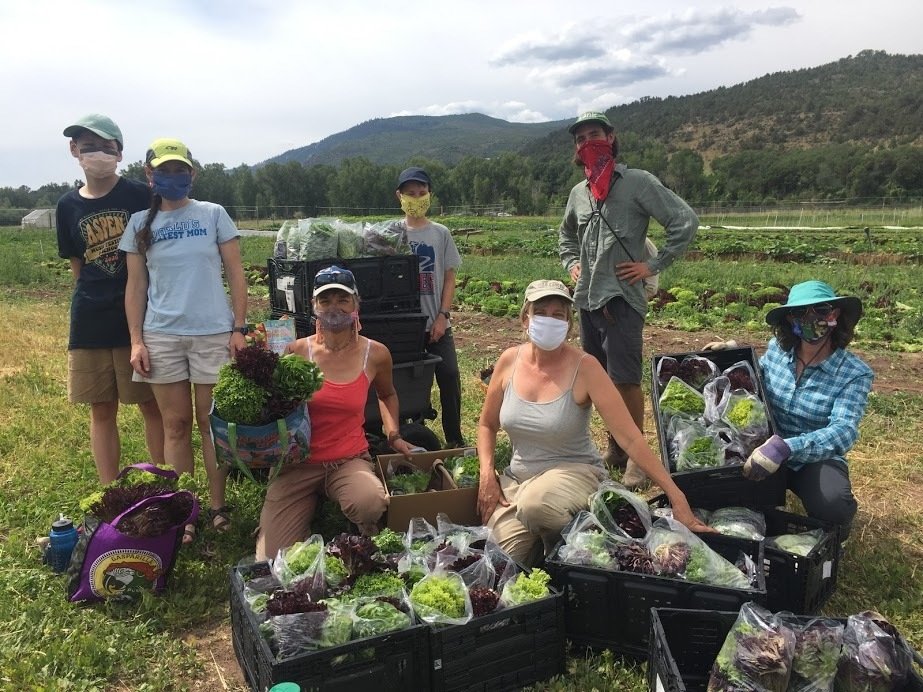 62,326 servings gleaned. 617 community volunteer hours. $50,802 of surplus food—and that’s just on the Western Slope. These are the numbers that showcase the work of the three-year-old nonprofit UpRoot as the organization continues to grow across the state.

UpRoot works to reduce the amount of agricultural surplus in Colorado. Started in 2017 by Carbondalian Ciara Low and her colleague on the Front Range, David Laskarzewski, UpRoot offers free gleaning services to farmers and homeowners alike. Gleaning is the act of gathering the remaining produce after the initial harvest.

UpRoot donates the produce they glean on the Western Slope to the Lift Up food pantry.

“One of the things that I love about gleaning is that it’s pairing an existing resource with an existing need,” Low said. “The reason we got started was realizing that food pantries are often lacking fresh produce. Meanwhile, there is surplus produce in backyards and on farms that isn’t getting to people. Marrying those two resources is one of the most amazing things about gleaning.”

In addition to providing food to the community members dealing with food insecurity, UpRoot’s work aims to reduce bear visits to the Town.

“For the sake of bears, we really want to limit those interactions [with humans],” Low said. “Always in the valley there are bears euthanized each year. As climate change affects our seasons, and there’s less reliable food for them in the high country, bears are continually going to come into town and interact with humans and be looking for food. Making sure that there’s not fruit around attracting them feels like a pretty important way to keep bears safe,” she continued.

Low urges Carbondalians who wish to avoid a bear encounter in their backyard to register their farms and fruit trees for a glean at no cost. People can also register to volunteer to glean — visit uprootcolorado.org for either.

“Some homeowners… like to invite their friends around and be very involved in the glean, and others will say yep, I’ll be at work but just come around the back and harvest the fruit and take it away. So there’s really no obligation to be involved,” Low said. “We always offer the homeowner some of the fruit we glean, and we encourage volunteers to take a bag home for themselves and their families.”

UpRoot is following standard CDC guidelines to ensure the safety of their volunteers. Each glean has a hand-washing station, a mask requirement, and a limited number of people so everyone can social distance throughout the glean. It is also encouraged for people to sign up as a household to volunteer.

“I guess this isn’t surprising, but we’ve had more volunteer interest [this year]… than normal,” Low said. “I think that’s because number one, people are more interested in local food security right now, having seen the supermarkets with shelves that are low. People are paying more attention to what’s grown locally. I think another thing is people are also keen to… get outside and have an activity.”

Christina Leas is a Carbondalian who participated in her first glean last Thursday. The glean was at a private home and consisted of five volunteers.

“They had a cherry tree in their front yard. …The family had already harvested a lot, they said, and made a bunch of pies out of them already, and they didn’t need any more because it was a pretty big tree,” she said. “We were there [for] an hour and half, and then we ran out of cherries that we could reach. We were filling up these little plastic bags, and I think we got 15 of those bags.”

Leas said she felt very safe COVID-wise at the glean.

“They had us sign a waiver; they even were like you need to read this before you sign it. It was pretty detailed… [it said] these are the rules you have to follow, otherwise you can’t glean with us.” Everyone followed the distancing rules and kept their mask on, she said.

Leas said she would love to volunteer with UpRoot again.

“It was a really great way to meet people, especially during COVID times. I appreciated that, making new friends … Everyone came separately, and I’d say it was a young 20 to young-30 crowd. They were all from the valley. One guy came down from Aspen, and everyone else was from Carbondale.”

In addition to gleaning, UpRoot has pioneered other initiatives to reduce agricultural surplus in Colorado. One example is the two-year-old Farm to Food Pantry program, in which UpRoot purchases food from farmers at market price to donate to food pantries.

“We believe it’s really important to value the nutrition in food that is grown locally,” Low said. “This program uses up-front contracts with farms, so we pay them at the front end of the season, kind of like a CSA model, and then they commit to growing a certain amount for us based on that price.”

Low also noted the work her colleague on the Front Range is doing to reduce surplus.

“This will be the third year of a pilot mobile farm workforce program. Across the state and across the country, a lot of surplus is left on farms simply because farmers don’t have the labor to harvest it,” she said. “The base of the initiative is…to provide farmers with an on call workforce…for the time that they really need a lot of hands.”

Perhaps a silver lining of the coronavirus is the amount of interest in UpRoot this summer.

“I’m actually hoping that we’re going to glean more this year than we did last year based on the interest we’re seeing,” Low said. “We’re having more people [than ever] register their fruit trees.”