You can still shop second hand 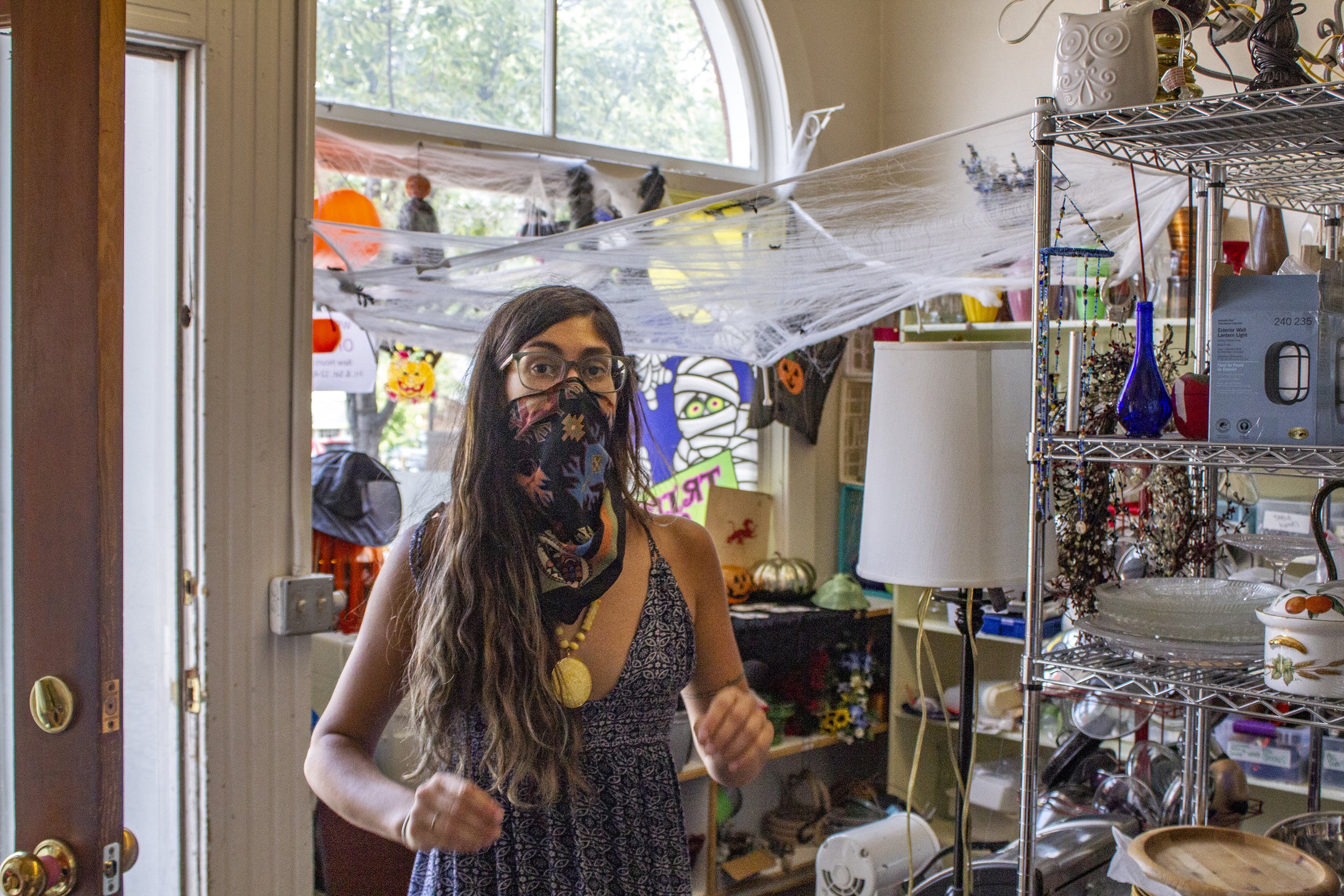 Thrifty finds are making a comeback and it’s a good thing because their customer base has apparently been chomping at the bit to get in on the action.

Though it may seem counterintuitive to shop second hand — as far as passing along germs goes — local merchants are easing such concerns and doing their darndest to keep thrifters safe.

The Rebekahs (Near New Store)

The Near New, or The Rebekahs, as locals know it, re-opened its doors in the last month and it’s funneling folks in one door and out the other — literally. When you walk in the door you’ll see directional arrows pointing out the one way route through the store. After taking the loop and having the opportunity to peruse each section the path culminates at the register and back out the opposing door.

Anna Abdelaal, a young Rebecca herself as well as a board member, is glad the store is conscientiously propping its doors to welcome the public again. “All of our people are just super happy that we’re open — they love coming here,” Abdelall said of their clientele.

According to Abdelall, the board’s decision to reopen was unanimous, though some members didn’t feel in as big of a hurry. Ultimately, the group wanted to get back to it so they could continue to fundraise for specific causes and scholarships.

Prior to re-opening, the Rebeccas board continued to meet at Friendship Park (which they also own) adjacent to the store to devise reopening strategies and decide on fundraising options. “That is where we decide what we want to do with the finances that we’ve gained; since we are volunteers we’re not profiting,” said Abdelall.

As it is a non-profit the incentive of reopening is not for the good of any proprietor but rather for various causes the organization contributes to as well as the community at large by providing the most affordable dress-ups in town.

During the closure, Abdelall was happy to report that donors were kind enough to not fill their stoop with knickknacks and various sized bags of clothes. Now, as was always the case, donors can only drop off during store hours. Furthermore, and this is new, people will have to bring their donations to the side door at the corner of the building, across from the Village Smithy. “We are accepting only two containers of things at a time from a family or individual,” said Abdelall.

Once items are admitted they are quarantined for a week before volunteers break into the bags and organize what they’ll put on the shelves and set aside what will be recycled as textiles at the Pitkin County Dump. Not to say they will not still be multitasking — they will — but this does mean you will not see the ladies sorting in the front of the store like the good old days.

“A lot of our volunteers are over the age of sixty five but not all of them — and that’s why we’re open now,” Abdelall explained. “We’re just doing what we can with the people who are willing to work at this moment, and that’s why we have limited hours.”

Currently, the Near New is only open from noon to 4 p.m. Fridays and Saturdays instead of its previous four weekdays. “We’re hoping to be opening back up on Thursdays within the next few weeks — that’d be great,” said Abdelall.

Abdelall is the Friday manager. While working the counter someone motioned to her to inquire about the price of something bright, folded and sealed in its packaging, “What is it… a t-shirt, pantyhoes, tights?” Abdelall asked. The patron just shrugged their shoulders and Abdelall replied and laughed, “Okay, one dollar.”

The general vibe has not changed much, and while they’re not making the same numbers as before it appears things have not slowed too much on the days they are open.

That said, last year the Near New raised more in profits than any other year on record.

“Right now we’re doing our scholarships,” said Abdelall. “If you’re a high school student that is going to go to college in state we can offer you some assistance.” Due to COVID-19 this process is taking place later than usual but they nonetheless intend to assist a number of the 2020 graduates.

Some recent things they’ve donated to include the town’s new pickleball courts and the Carbondale Middle School music department.

Do not be deterred by the dark plastic draping the interior of the old storefront windows. Just walk to the side door and you’ll see the same Miser’s sign hanging above the new entrance to this timeless thrifty destination.

Business owner Bertha Eubank is excited for the community to see Miser’s new look. Its previously frequent shoppers will notice one not so subtle difference: that the front of the store is no longer accessible.

Rather, when entering — and upon noticing the new paint and dashing interior — the initial space seems small. However, in the corner a stairwell leads to the basement which still has ample room for incoming apparel.

Eubank says they are also remodeling the front of the building and plan to rent the space out eventually.

When it first reopened on Aug. 11, people were confused because of the new entrance, Eubank said. Overall though, she said, “We’re seeing a really good response from people.”

Miser’s business hours have also been reduced from seven to five days a week. In order to drop off consignment someone must call and make an appointment first. Eubank is offering 20 minute intervals between 11 a.m. to 2 p.m.  Tuesday through Friday.

To Eubank it is important that people, “Stay safe and healthy — health for the community, myself and my employees,” she stated.

“We opened on May 4,” said Deborah Herrell proprietor of LuLu’s Thrift Shoppe in La Fontana Plaza, “It was the first day that they allowed us to reopen.”

Herrell shut down the store by choice before retail businesses in the state were required to do so. Therefore the business had been closed for about two months.

“We’re right back on track though,” Herrell said, but with some differences.

“We’re limited to 10 people maximum in the store — including employees,” said Herrell and “When we first reopened we took some old sheets, bleached them and then cut them into bandana size pieces so if anyone didn’t have a mask we could give them one.”

Herrell has received a lot of calls regarding donations but said, “We have actually really limited the amount coming in through the front door.” She added that  the bulk of the store’s items come from providers around the state and that those commodities, “Have already been in bags in storage units for a month or more,” before arriving at LuLu’s.

Though it is a for-profit business, Herrell was proud to say, “We complete the circle and we donate ten to twenty percent of our gross sales forward every month.”

BDC was not available for comment for this story. The business is open, albeit under new ownership — Huertas Brothers.

The previous owner, Dessrie Bartelt, was sued by a consigner, Ray Meeks. Garfield County Court Judge Paul Metzger ordered that Meeks be paid reparations totalling $3,010.05. However, the case was reopened after Meeks filed a  “Motion and Affidavit for Citation for Contempt of Court” against Bartelt for not settling up. Metzger granted the motion and a citation was issued for Bartelt to appear on Sept. 3.