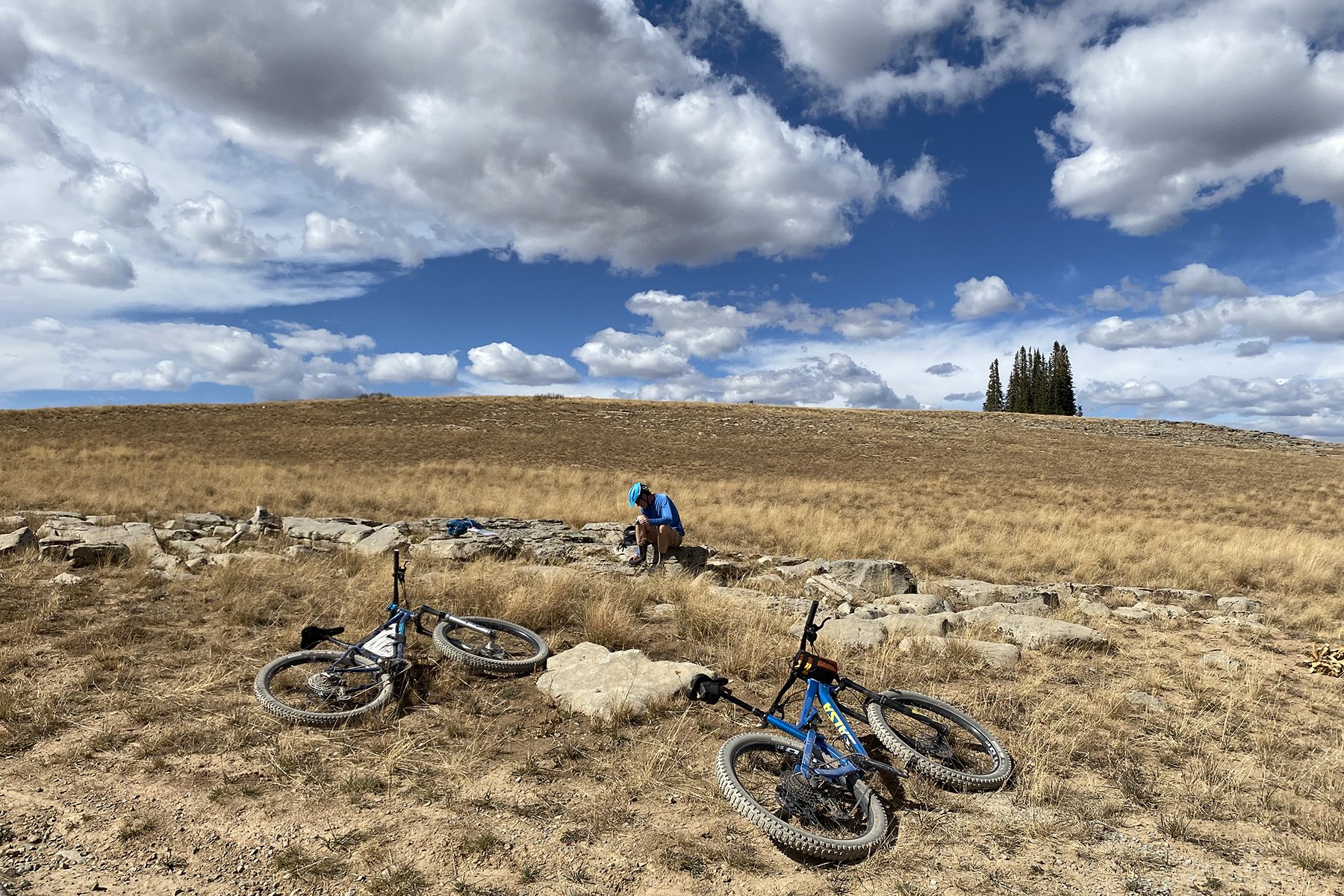 The wind blows in from the west, rustling the sand-colored grass of the Flat Top Mountains north of Glenwood Springs. The aspen leaves have turned, most already fallen and ready to return to the soil. The remaining leaves that still loiter in some of the aspen groves create a patchwork of yellow against the dark green fir and spruce and the muted browns of the dying grass.

In the distance, Mt. Sopris, Capitol Peak and other high points of the Elk Mountains are recognizable, along with the Gore and Sawatch ranges. Geologic uplifting and volcanic activity of millions of years ago left the flat, erosion-resistant basalt and limestone caps that give the Flat Tops their signature tabletop shape and provide wide-open views of Western Colorado.

The hills are readying for slumber; soon the snow will fly. Colorado’s first people, the Utes, considered winter a time for rejuvenation. The White River Utes would migrate seasonally and spend spring, summer and fall hunting game in these higher elevations of the Flat Tops. At about this time of year, when the wind carrie a hint of winter, they would start heading down to the Colorado, White, and Yampa river valleys to spend the winter in warmer climes.

The Utes, or Nuche (“The People”) in their language, had lived in Colorado and the surrounding states since time immemorial. They were hunter-gatherers, traveling by foot, until the arrival of the Spaniards (who called them “Yutas”) in the 1500s. From the Spanish, the Utes acquired horses, which enabled them to travel further and faster and made their nomadic lifestyle much more efficient. It marked the beginning of a fruitful time for the Utes.

They migrated along the same routes seasonally to establish wikiup and teepee villages in the Rocky Mountains, which they called “The Shining Mountains.” There are many well-known “Ute Trails” that crisscross the valleys and peaks, but the Flat Tops’ Ute Trail — including its off-shoots that connect the surrounding river valleys — is believed to be the highest, longest protected Ute migratory route in Colorado. With the help of Southern Ute Kenny Frost, the White River National Forest identified 57 pristine miles of this route nearly three decades ago, which is miles wide in some sections and others only a narrow passageway through the forest.

“The Ute Trail is a living being,” Frost said during the presentation “Historic Travel Ways of the Crystal Valley” in August 2017 in Carbondale. Frost, who lives in Ignacio and is the great-grandson of a sub-chief to Chief Ouray of the Tabaguache band, actively shares information about Ute traditions to teach younger generations and preserve Ute culture.

“I have spent a good part of my life looking, walking the lands of my Ute ancestors of the sacred places, vision quest sites, Ute burials, Ute trails. I have walked, rode horseback, and traveled by vehicle to find and pray at such sites,” Frost posted Oct. 19, 2020, on Facebook.

A series of trails, dirt roads and double-track in the Flat Tops runs nearby or are part of the ancestral Ute Trail from Dotsero to Meeker, and I traveled some of the trail by bike, riding into the Flat Tops from Dotsero, Sweetwater, New Castle and Meeker to experience the high mountain areas where the Utes “were closest to Creator,” according to Northern Ute Clifford Duncan, as quoted in “Memoirs of a River…Up the Crystal” by Marble writer Charlotte Graham.

“Nature can take the place of a teacher in a regular school setting. It does not teach you, but opens your eyes to see,” Duncan told Graham. “For example, you sleep during the night. What makes you get up is the light that hits you in the face. Nobody is there to say get up. It’s all in a given time. You get up. You eat. You know you need shelter. Nature provides guidance.”

A short foot and bike route called the Dotsero-Ute trail starts off of Colorado River Road near I-70 on the eastern end of Glenwood Canyon. This trail gains 1,600 feet in three miles, but dead ends at private property above the canyon. Nearly seven miles further north is Sweetwater Road, which leads to Sweetwater Lake and the Sweetwater Indian Cave, where Utes painted images of deer, elk and horses. Near the lake is the Ute-Deep Trail (No. 2031), which takes hikers and horseback riders west to Heart Lake, one of the numerous glacially formed bodies of water that dot the rolling landscape of the Flat Tops. In between these two trails, is Coffee Pot Road, which turns into FR600 and 35 miles later, ends at the Flat Tops Wilderness Boundary. This road intersects the Ute Trail and is open to bikes. I start here.

Gaining elevation quickly from the Colorado River Valley floor into national forest, cottonwoods give way to Gambel oak, then to sagebrush, pinon and juniper before the terrain levels into the rolling grasslands at 9,300 feet elevation. Just off this road is an overlook for Deep Creek, a dramatic canyon 2,300 feet deep. Aged wooden interpretive signs note the Colorado River Valley to the east, the 1860 boundary of the Ute reservation.

The Utes roamed the Rocky Mountains freely until white settlers began moving West, and once gold, silver and other minerals were discovered, the U.S. government began using treaties as a way to push the Utes into confined areas. Frederick Pitkin was elected governor shortly after Colorado became a state and openly viewed them as an impediment to Manifest Destiny, as noted in The Last War Trail: The Utes & the Settlement of Colorado. Pitkin described the mountains as having “great mineral wealth” and the Western Slope as being excellent for grazing and agriculture. “I believe that one able-bodied white settler would cultivate more land than the whole tribe of Utes.… If this reservation could be extinguished and the land thrown open to settlers, it will furnish homes to thousands of the people of the state,” Pitkin detailed in a report to the legislature.

When Nathan Meeker was assigned as the Indian Agent for the White River Utes in 1878, he believed he could “civilize” the Utes and turn them to farming by offering small plots of land and permanent houses. But the Utes thought this way of life and the concept of land ownership were strange. In the Utes’ view, hunting was a sensible and sustainable way to live, compared to clearing the earth of its natural vegetation, turning up the soil, and diverting the river’s flow to grow non-native crops.

Pedaling away from Deep Creek, the wind strikes my cheeks head on, and I muse that I’d better have a tailwind on the return. A hawk with brown specs on its underside soars past. Dust devils spin erratically along FR601 leading to Heart Lake, my lunch spot and turn-around point. When my friend, Paul and I arrive at the lake, we look across the lake and scan the horizon for a 6-foot-tall cairn that is said to be an old Ute Trail marker. We can’t see anything so tuck into a shallow ravine to get out of the wind and eat lunch.

The Utes were masterful with Colorado’s plants, knowing which were edible and harvesting other plants for use as medicine and in ceremonies. The hunt for elk, deer and other game beginning in spring was critical to the Utes’ survival. Every spring, different Ute bands and other Indian tribes, such as the Hopi, would gather to hold the ceremonial Bear Dance to celebrate the arrival of spring and “awaken the spirit of the bear in the People.”

On a different October morning, I pedal up the New Castle-Buford Road, past the West Elk Trailhead and some pioneer cabins at Triangle Park to Clark Ridge Road, a double-track near the Ute-Meadow Trail at 9,500 feet. I stop to take in the far-off views of the Elks, as well as the Mamm Peaks by Silt, the Bookcliffs, Grand Mesa and Colorado Plateau. On this outing, I saw one herd of elk and a large cow dart from a meadow into an evergreen forest. Centuries later, the Flat Tops are still excellent hunting grounds.

Those of us in the Roaring Fork Valley are lucky to live in the Utes’ Shining Mountains. Although we cannot change history, we can learn from it. Perhaps lessons of understanding and empathy. Perhaps rules taught by Southern Ute elder Kenny Frost’s grandmother, who advised: “Ignorance, conceit, anger, jealousy and greed stem from a lost soul. Pray that they will find guidance.”