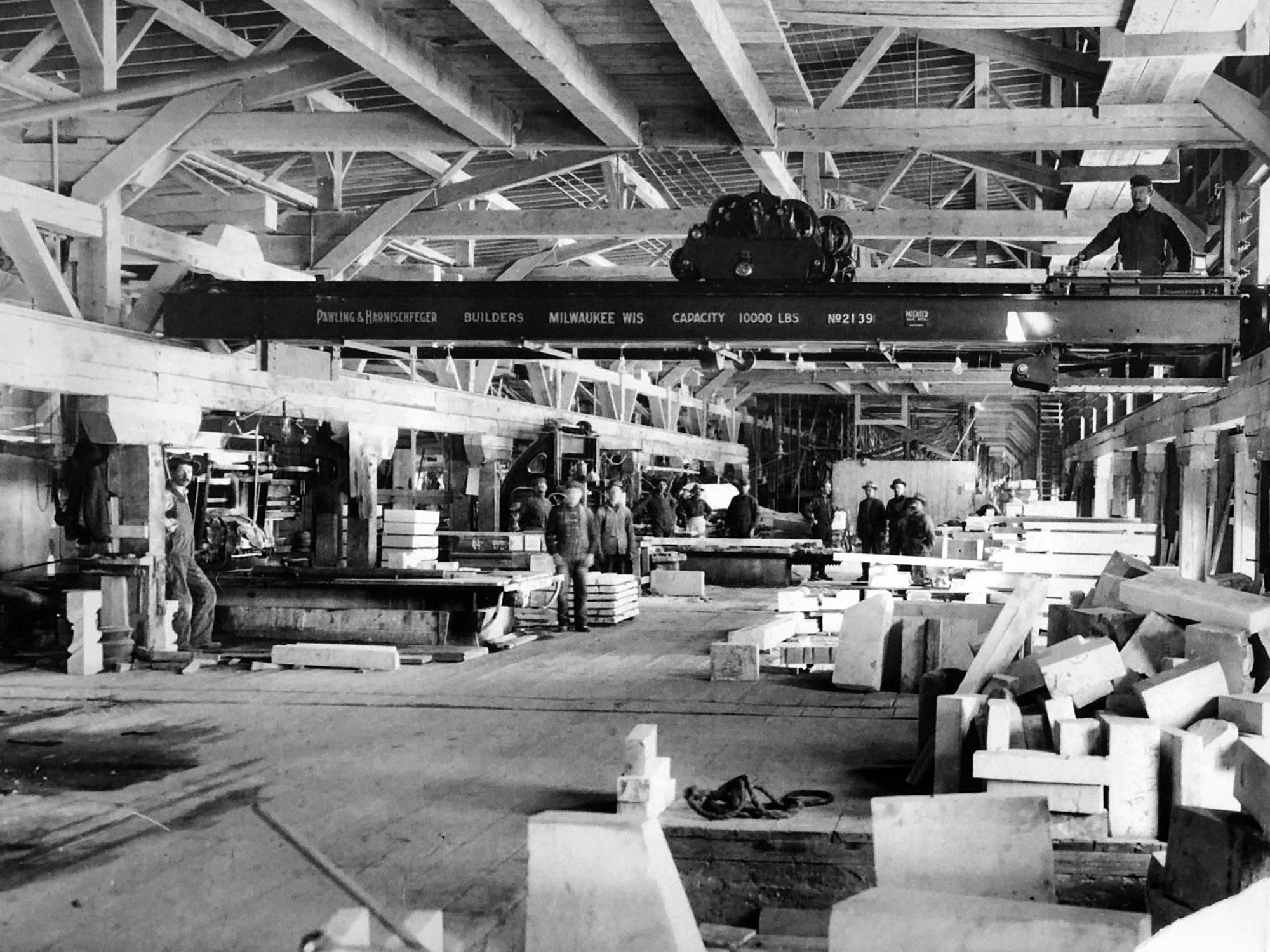 Much is known about Col. Channing Meek, the enterprising businessman who turned a marginal marble quarry into a nationwide operation in the years from 1905 until his untimely death in 1912. Less was known about Meek’s globe-trotting general manager at the Colorado Yule Marble Company.

Descendants of John Forrest Manning donated their great-grandfather’s memoirs to the Marble Historical Society this summer, and what tales they tell.

Born in Virginia in 1862, his first memories were of Union soldiers marching down the street in the town where he lived. Flash forward to the 1930s and he is writing a letter from Hawaii, telling about the beautiful music and singing he had enjoyed that night. The music “ … carried me back to my boyhood days when I used to sneak out to the negro (sic) quarters, on a moonlit night, to listen to  the Negro melodies and the banjo.”

During his 75 years, Manning:

From all accounts, Manning was born into an at-times prosperous family, although not without its tragedy. Shortly after his birth, a brother and sister died “ … and were buried by the servants and workmen …”, he writes. Manning’s father was a captain in the Confederate Army, “ … which at that time was fighting for what the Southern states maintained was their right to continue with slavery …”. He remembered “graphic stories” from his mother. “The war having stripped the South, and especially those in northern Virginia, of their slaves, livestock, forage and farm supplies, the matter of getting a bare subsistence was a daily struggle,” he writes.

Manning’s family eventually got back on its feet, with his father buying and selling grains and fertilizers in Leesburg, and opening a limestone quarry and kiln. “My life in boyhood was a happy one … as we had plenty of servants, nice horses to drive, and children’s parties. I was taught to dance when quite young, which made the parties a great pleasure to me.” All that changed during what Manning describes as the “depression” of 1872, when his father was wiped out financially and was forced to clear land for a 150 acre farm his sister gave to him. “This property was heavily wooded, and here I, at age 14, with my younger brothers and father chopped down the trees, built a house and made our home.”

It’s hard to tell whether Manning attended school after the age of 12, but by the age of 15 he was tired of the “drudgery” and “deprivation” of home, and asked his parents for the opportunity to go out and work for a living. They agreed, and the young Manning went to live and work on his nearby uncle’s farm. His salary was $5 a month. “My hours of labor were from four in the morning till nine at night …”.

From ages 15-17 while living with his uncle, a wealthy businessman from Washington D.C. often visited. “He became very fond of me and invited me to come to Washington and stay with him until I could find a job.”

At 18, after a series of jobs, Manning landed a bookkeeping job at a firm. When the head bookkeeper got sick, Manning was given his position. “As on the farm, I knew no hours. I was on the job at six o’clock in the morning and many nights found me in the office at twelve o’clock. One of the company’s co-owners became fond of Manning, and “ … often took me to meetings and banquets, which gave an acquaintance with the businessmen in Washington.” One of those men owned a marble mill that manufactured slate mantels and conducted general marble work. At the age of 20, in 1882, Manning bought a half interest in the business. “From 1883 to 1900 our business prospered,” Manning writes.

In 1889, Manning met a woman named Florence, who would become his wife, and together they had four children.

By himself and with partners, Manning the businessman diversified, building single family homes, the Cairo apartment house and public buildings. He also acquired “considerable” property in Washington D.C. but had been in a “speculative mind”. When an economic slump hit the nation in 1902, he was eventually forced to sell most of his assets but at the same time bought the Columbian Marble Company in Rutland, Vermont. Manning was 40 years old.

The Columbian Marble Company did well enough for a while, which enabled the Mannings to travel to Europe as part of a plan to break a strike that began in 1903. “ … there was much violence by the strikers and imported thugs who beat up and maltreated workmen …”.

Meanwhile, while dining in Paris during the strike, the Mannings ran into an old friend of J.F.’s who, with his wife, was just returning from Russia. His friend had been advising the Czar on submarine water crafts. Manning learned another old friend from Virginia was in St. Petersburg. “ … although the Russo-Japanese war was on, we decided to go to St. Petersburg and Moscow.” Which they did.

Back in the U.S., by about 1905 the Vermont marble quarry was in bad financial shape due to “lack of sound material to operate it.” The quarry company was forced into receivership and Manning was left with no capital and no job. He was weighing at least two job offers when he was contacted by Col. Meek in Marble. “I visited the property and was much impressed with the possibilities of developing a large industry, and accepted the position.”

Manning writes that from 1906-1909 he was very busy securing business, building a new plant, opening quarries and constructing a town in which men could live. A turning point for the company was landing the contract to supply marble for a courthouse in Cleveland. Other orders were coming in so rapidly that the mill (fabricating plant) was running 24 hours a day. With Manning’s help, the town of Marble was incorporated. He was elected justice of the peace and president of the school board. The company built many small houses for its workers. There were no less than 22 nationalities living in town, with the majority Italians, Germans, Swedes, Czecho Slovaks (sic) and Norwegians. “These nationalities were as far as possible segregated in town.”

In 1908, Manning had another strike on his hands, but “By heroic measures the conflict was held in check by putting the riotous members in jail and getting agitators out of town, after which business was resumed in a normal way.” (Note: In other histories of Marble, some speculate that the strike was actually fomented by a rival quarry in Vermont).

The high-water mark for Manning, Colorado Yule and the town of Marble probably occurred in 1913, when the company landed the contract for marble to be used for columns and steps for the Lincoln Memorial in Washington, D.C. “There had been no marble job in the United States or elsewhere that I know of erected with so many large blocks of Marble,” Manning writes.

Two years later, however, the Colorado Yule Marble Company began a steady decline, as 10-year bonds that were issued under Col. Meek in 1905 became due, and the company struggled to pay them. By 1919, Manning had moved on from Marble, and spent the next 15 years or so as vice-president of the George A. Fuller construction firm.

Manning retired from business in about 1932, which gave him more time for travel. One trip took him and one of his daughters to Japan, of which he was quite impressed. In a letter to a friend, he writes, “New buildings, new roads and other improvements are seen on every hand, all up-to-date, with railroads equal to the Pennsylvania and New York Central tracks.”

So, there you go. J.F. Manning, 1862-1936. From the Civil War to the lead up to World War II. Quite a life. Note: Oh, yea. Manning was also elected mayor of Rutland, Vermont at one point and served a term in the Vermont state senate.

Author’s note: Thanks to J.F. Manning’s great-granddaughter, Pamela Thornburn Bloch, for confirming some dates in this story.