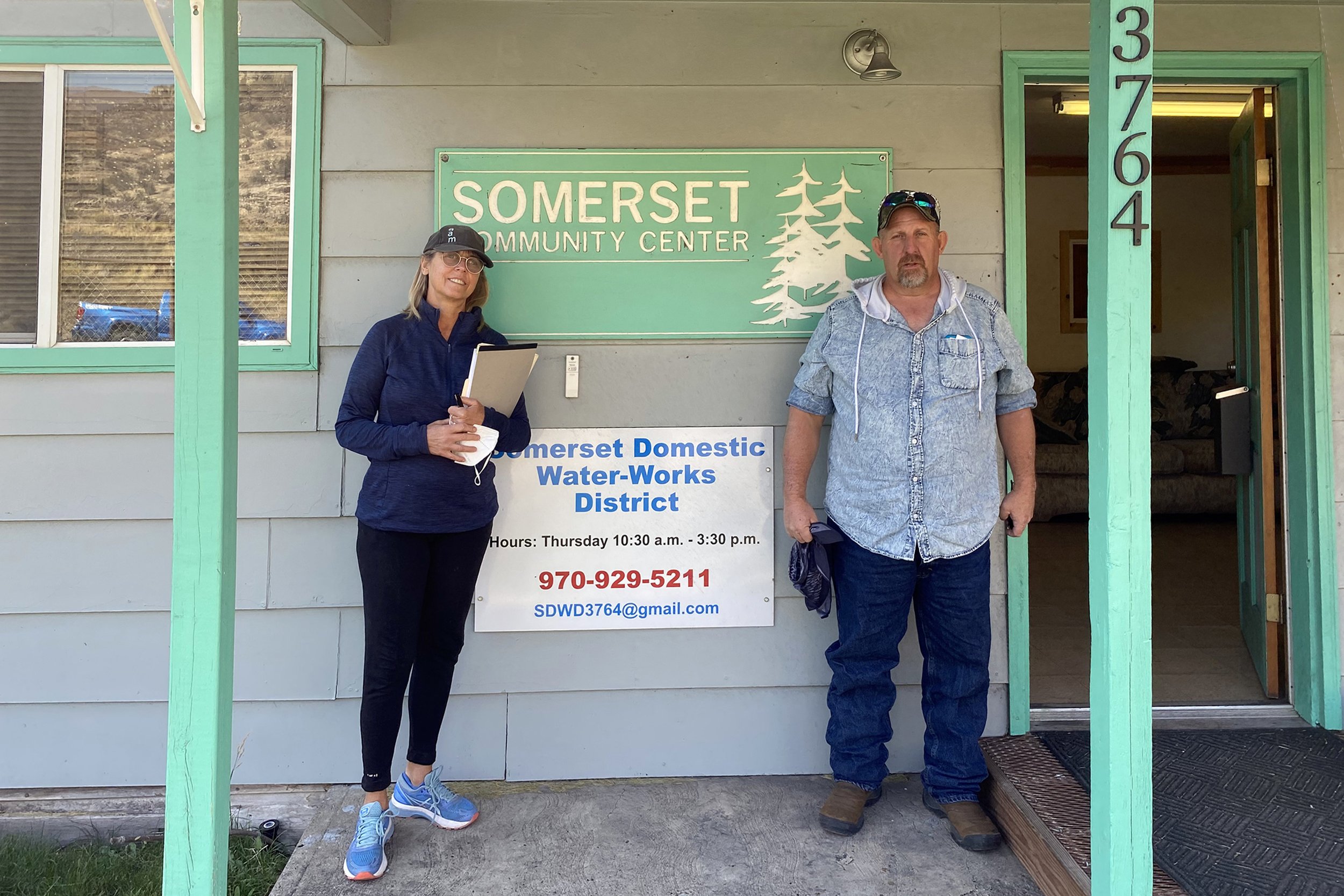 For nearly 60 years, the tiny village of Somerset in Gunnison County has been fighting for clean drinking water.

Nestled on the far side of McClure Pass, just 49 miles south of Carbondale, sits the small community. It’s not incorporated as a town, and the only governing body is the elected five member Somerset Domestic Water Works District Board.
Gunnison County oversees all of the other services besides the water. And therein lies the rub.

According to Somerset Water District Board President John Mlakar, the county has not lived up to its responsibilities to help Somerset with this major problem.
However, County Manager, Matthew Birnie said several weeks ago the Somerset Special Water District is fully responsible for the water.

The March 2019 District Statement of Purposes explained that historically the district has received its water from Oxbow Mine which is regulated as a water wholesaler. The raw water comes from the North Fork of the Gunnison River, is treated at the Oxbow Plant, goes to a finished water storage tank, then to a master meter and, finally, the water is distributed to the homes.

Most of the town’s 100 residents feel they are fighting for survival as water experts report the potable (drinking) water is not safe.

Somerset water quality concerns include the presence of dangerous chemical interactions that may result in trihalomethanes (TTHMs). A study by the Environmental Working Group showed TTHMs are contaminants that form during water treatment with chlorine and other disinfectants.

Water quality tests have failed frequently from 2015 to 2020, including a just concluded year-long evaluation. Many water plants in Colorado have faced this same challenge.

In a 2019 agreement between the district and Oxbow, the mine agreed to install TTHM removal equipment, which, Mlakar said, was not done.

The challenge, Mlakar said, has been to work out a final and reasonable deal with Oxbow and the Colorado Department of Health and Environment. Mlakar, born and raised in Somerset, compared the present state of affairs to a “David and Goliath” situation with the 100 people living there going up against a huge global conglomerate.

Mlkavar described the conflict as, “Big money versus the limited resources of a struggling community.”

He added, “We also can’t afford to continue with high cost water lawyers.”

What are the choices?

Somerset has three options on the table: construct a brand new water treatment plant in the town, accept Oxbow’s offer to turn the entire existing plant (valued at more than $500,000) over to the district, which from then on would be responsible for all operating and maintenance costs or continue researching, negotiating and and getting additional water expert input.

Mlakar believed the village’s monthly water bills could jump from $82.50 to $200 per residence if the district took over the existing water plant, presently located near the mine. He explained this increase would be hard to afford, as the majority of residents are retired or living on fixed incomes.

The district projected a monthly operating cost of $7,000 if the present Oxbow water treatment plant is taken over. The anticipated price tag is $80,000 if a brand new water treatment system on community property is approved.
Mlakar concluded “The cheapest solution I feel is to build a new treatment plant, not take over the existing structure.”

Despite a recent contentious district board meeting, members voted four to one to move ahead and directed members to meet with the three entities involved: Oxbow, the Colorado State Department of Health and Environment (CDPHE) and independent water experts who have been involved for several years.
Mlakar said, “We want to get consensus from water quality professionals on the best option for Somerset. ”

The sole dissenting board member, Debbie Pennington, preferred the third option which calls for the town to continue researching and to pressure Oxbow to make more concessions. . She also was concerned that Oxbow might just shut off water to the town.

Pennington explained, “The main issue is who is responsible for Somerset’s water quality,” and said after reviewing the 1962 contract, “Anybody who bought the mine has to follow the terms of that agreement, especially ‘to provide domestic potable water.”

Bill Sterns, also a district board member insisted, “For us to survive we have to get water rights, which are presently owned by Oxbow.”

But, all agreed, the goal was to reach a permanent agreement with the mine while keeping residents and dissenters on the same page

Somerset falls under the Ragged Mountain Fire District’s umbrella. That district’s President Terry Commander urged, “I believe it is a time to come together and look at the bigger picture of what Somerset really is and should be known for. I am a believer in “Greater Somerset” and look forward to a strong future.”

In a recent interview with Oxbow President Mike Ludlow, he would only state, “We are working with the board.” He responded “no comment” to all other questions.

Financial concerns are a major stumbling block, Mklavar said. “We will need loans and grants to fund any of the options” in addition to grants previously received from the Colorado Department of Local Affairs (DOLA) and loans from Gunnison County.

The present board took over in May 2020, after half the previous board was forced to resign and the other half was voted out, reportedly because of financial concerns.

In addition, Somerset’s Colorado State Representative Julie Christie (D-61), when recently informed by the Sun of the situation, decided to become involved and is looking forward to meeting with the district.

Oxbow is currently owned by billionaire Bill Koch, who also controls Gunnison Energy, now involved in the situation as part of his global energy organization.
Koch is also known for building a replica Old Western Town to be visited only by him and his guests. Many will recall Koch’s brothers were major donors to conservative political causes.

In 2012, after Koch’s futile attempt to have the public dirt road through two ranches he owns (used significantly by local townspeople for hunting and other outdoor activities) be changed to private, he closed the mine. Some in town consider the move an act of retaliation.
High Country News reported In 2016, “The Oxbow mine coal silo in Somerset, Colorado was demolished this morning. It is part of the reclamation effort of the coal mine now that it is out of business.”

How it all started…..

In 1962, the initial agreement between Somerset and the Columbia-Geneva Steel Division, United States Steel Corporation – the then owner and operator of the Somerset mine- was signed.

The document called on Columbia, in case it terminates operations, “to give the settling pond, pumps, filters, chlorinating systems, tanks and pipelines to the district at no charge.”

In addition, Columbia agrees that “The district shall have the right at any time to test and inspect such meters and instruments.”

The present Water Board felt these items and others have not been fully followed by the mine.

In 1985, Columbia sold the mine to Kaiser Coal Company. Then Pacific Basin operated the plant until the mid 1990s. Oxbow bought the complex and still maintains ownership.

Oxbow Executive Vice President Mike Ludlow, who also sits on the Colorado MIning Association (CMA) board of directors, would not comment on the 1962 contract, the water quality or other questions about Somerset but did say, “We’re working with the Somerset Water District.”

Somerset homes sell for $31,000 to $100,000 making the community an affordable place to live.  Many in the town are afraid if water and other costs go up, people will have to sell their homes and the village will turn into a Redstone, as property values and prices will skyrocket.”

But one continuing problem in Somerset is its narrow roads which cause difficulties with parking and emergency responses. When the mine was first built, the company just told the miners that all of them could build a home anywhere in town, so more and more residences were constructed on tiny lots.