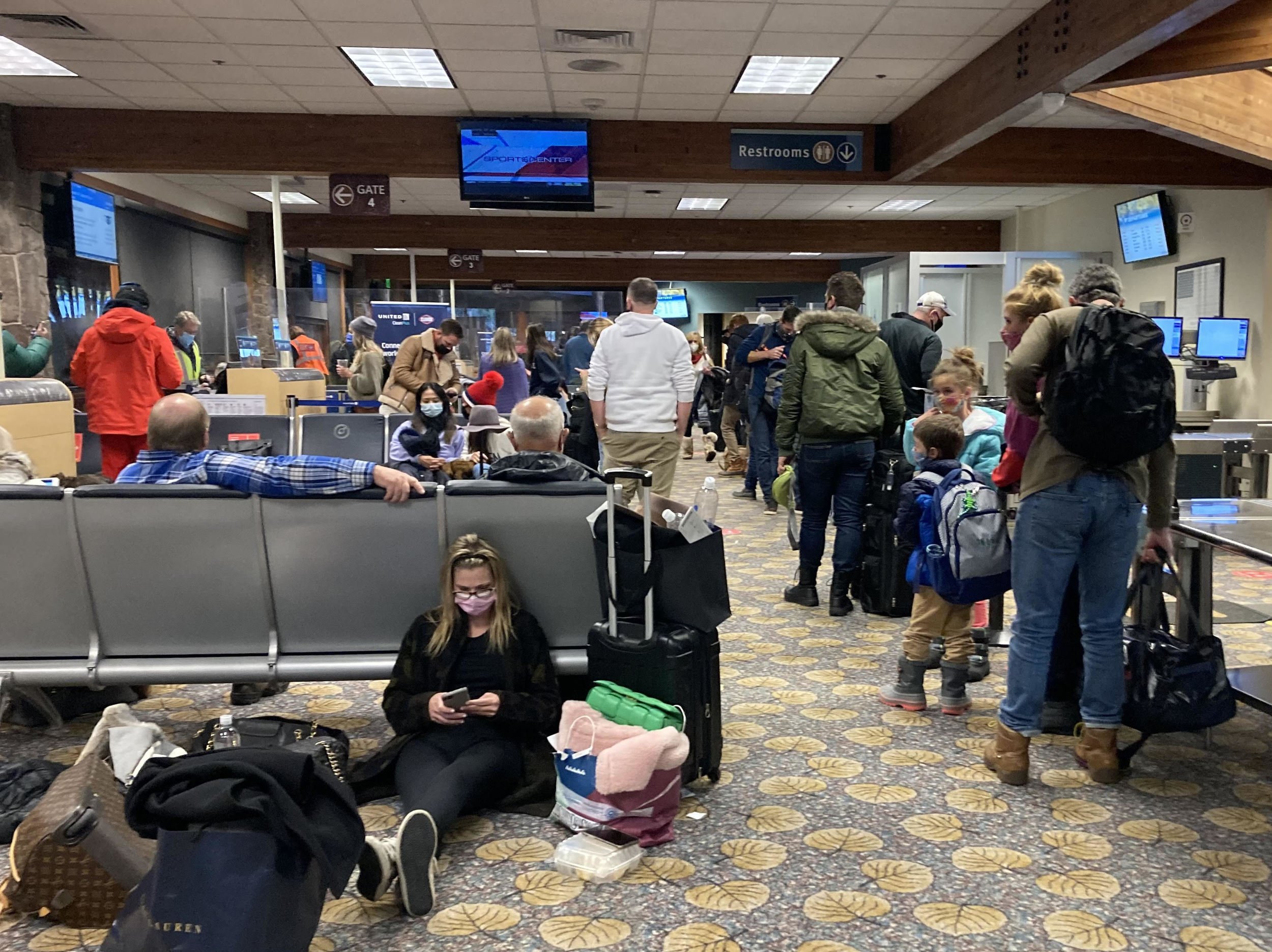 People continue to travel over the holidays through the Aspen Airport, though they had ahard time adhering to the intermittent advisory to keep their distance from one another. Photo by James Steindler

Traveling can be stressful in and of itself. Some folks cannot stand the thought of flying while others struggle to leave the house without worrying they’ve forgotten something — like Kevin. Throw COVID-19 in the mix and many will decide to nix the prospect of traveling altogether.

To a casual observer, on the evening of Dec. 13, the Aspen Airport was pushing the envelope in terms of occupancy — considering COVID-19 — within its terminal.

However, Aspen Airport’s Interim Director Rich Englehart shared, that according to the Federal Aviation Administration (FAA) the airport is exempt from dwindling its capacity. “The fact that this is considered a critical service there is no capacity reduction,” he stated.

The secure boarding area, which to those who are familiar is the two gates to the right after passing through security, has a maximum occupancy of 527 people.

Despite passengers expressing their concerns, Director of Operations, Safety & Aircraft Rescue and Fire Fighting Caroline Bonynge maintained that, “There was no point where the capacity was exceeded nor was it a concern that we were going to exceed at any given hour.” The airport’s staff did not respond to a request for the peak number of people inside the terminal that evening.

“On the 13th, we had a little bit of an IROP (Irregular Operations Policy) situation and because of that several flights were delayed,” explained Bonynge, “Which had several passengers within our facility.”

The holdup was due to a “disabled aircraft on the runway,” stated Bonynge. “Which closed the runway for a duration.” This also prevented incoming planes from landing, she explained, and, “Aircrafts that were in route [to Aspen] or in air, held as long as they could and then were redirected to other airports.”

While there is lots of signage encouraging travelers to socially distance, it becomes relatively infeasible as the numbers within the small terminal grow.

“Our biggest challenge right now is the terminal size,” Englehart said, “And with the amount of traffic that comes through, we are going to have some of these irregular events where capacity does increase.”

“We’ve got a very small terminal for the amount of passengers that go through on a regular basis and it’s been that way for years,” he went on, “One of the recommendations on the common ground approach to this is to start seeking funds to build a new terminal.”

Englehart indicated that he has asked the Transportation Security Administration (TSA) if they could give people the option of waiting outside after checking into the terminal. “TSA said that’s just an absolute ‘no no,’” he stated.

Although, Bonynge later added that, “Once passengers have been screened they may leave the boarding area but would be required to be re-screened by TSA in order to reenter.” While this option was not offered freely on the evening in question, it may be something to keep in mind for any travelers caught in a similar situation in the coming months.

The Aspen Airport partakes in a practice called “line management” where the airport regularly communicates with airlines in order to monitor the number of passengers coming and going. According to Bonynge, this is a voluntary practice which only a few airports participate in and is helpful in terms of keeping within capacity.

As for the evening of Dec. 13,  Bonynge said that, “At that hour we may not have been conducting line management in full because the flight loads that were expected to come in or depart would not have come close to exceeding our capacity.”

“The airlines set the schedules and manage delays,” explained Engelhart, “And we provide that line management to try and provide the best separation and safety that we can.”

Other than being left to work within a small space without having to reduce capacity, the airport has made many efforts to try and keep people safe. There are hand sanitizing stations, masking is mandatory, extra masks are available and messaging is pervasive throughout the airport.

“I feel confident that we’re doing all we can to try and keep people safe and healthy during events like this,” Englehart said, adding that “every time we have an event like this, in my opinion, it’s a learning experience of what we can do differently and how we approach things.”