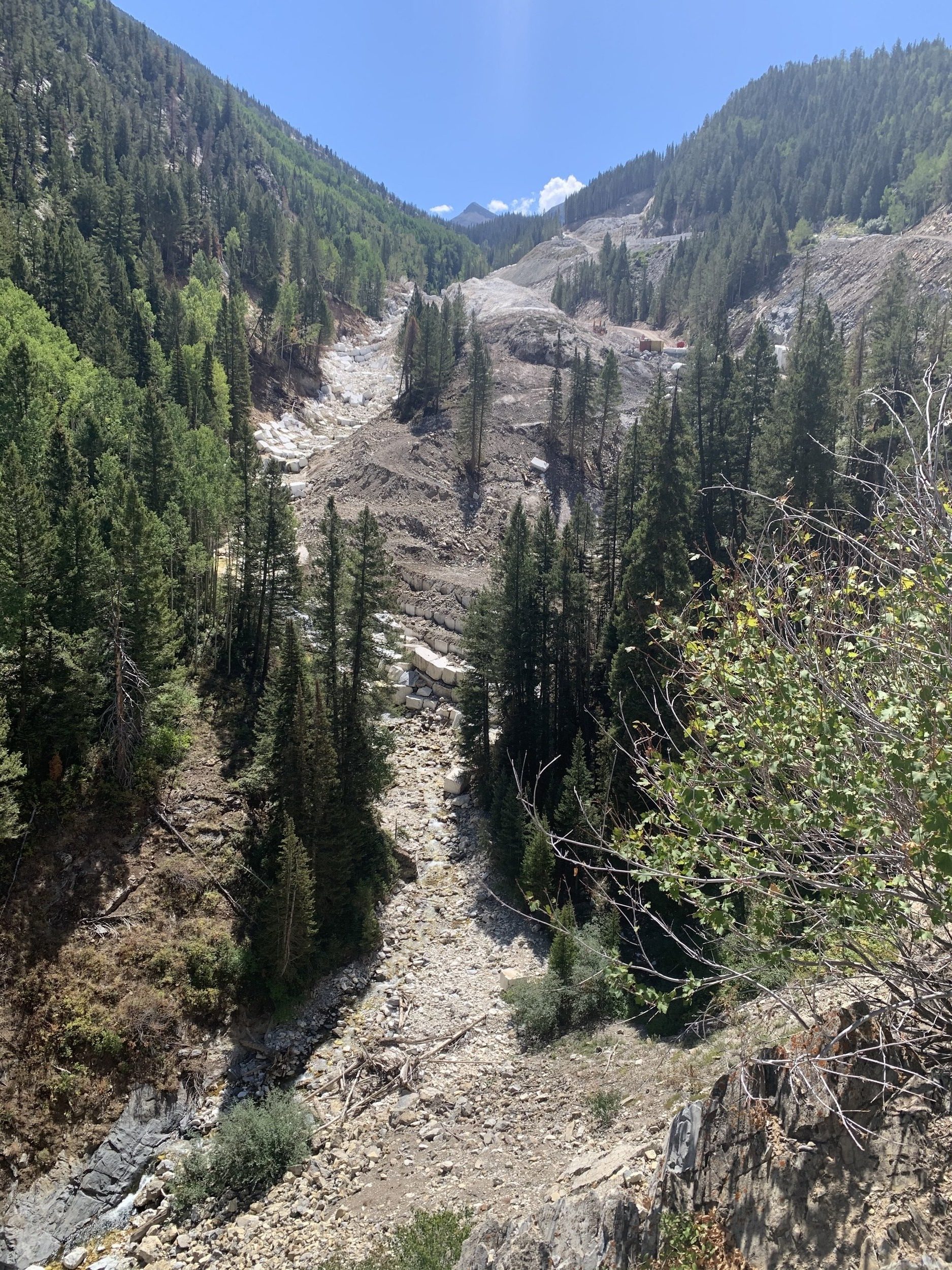 After a brief review of numerous formal requests, the U.S. Army Corps of Engineers has denied a public hearing to review the Marble Quarry’s illegal and unpermitted burial of Yule Creek above the town of Marble. The Corps states, “We do not believe there would be a valid interest served” by conducting a public meeting. Colorado Stone Quarries (CSQ) relocated Yule Creek in 2019, without permission, to facilitate the expansion of their marble quarrying operation. CSQ claims they were allowed to “temporarily” relocate one-quarter mile of the stream under a mining exemption for road building. The Army Corps has ruled that there was no valid exemption. CSQ has applied for a retroactive permit to move Yule Creek. If ever there was an example of “asking for forgiveness instead of applying for permission,” this is it.

All while undergoing punitive action for their oil spill at the mine site and applying for a permit for the creek relocation they had already completed, CSQ was busy. This spring and summer, CSQ removed the small mountain called Franklin Point which separated the natural creek bed from their new channel. CSQ took the overburden and refuse rock from their operation and buried the now abandoned natural creek channel with 97,000 yards of debris. The length and depth of burial of the natural drainage negates any thought that this action was “temporary” in nature. (Search YouTube for “The destruction of Yule Creek”).

This act of irreparably manipulating and burying the Yule Creek Watershed was accomplished throughout the year 2020. This work was done after both state and federal agencies were alerted to the illegal relocation of the creek by CVEPA in 2019 when they received our formal complaint.

This autumn, the Army Corps opened a public comment period regarding CSQ’s application to “move” Yule Creek. In what CVEPA regards as a very strange action, the Army Corps offered the public the opportunity to evaluate a list of alternatives to the Yule Creek relocation. All of the options were developed and proposed by CSQ, the entity that destroyed the original creek. CSQ touts their preferred alternative, which gives them what they wanted all along and which is their financially advantageous solution. The Corps asked respondents which alternative they preferred.

CVEPA likens this kind of “justice” to a convicted party offering the court a menu of penalties they would be willing to accept. Without punitive action for such a brazen and environmentally egregious offense, there will be no disincentive for future illegal activities.

The parties requested that the Army Corps conduct a public hearing(s), on-site restoration, on-going, third-party monitoring of water quality and compensatory mitigation (restoration projects both on- and off-site) and appropriate penalties. We believe that the Corps should research, study and evaluate all the alternatives to mitigation of the damages to the Yule Creek Valley. The Quarry should not be the sole source of information on which the Corps bases their decision. The Quarry should not benefit from the premeditated and unauthorized action during which they openly flouted state and federal environmental protections.

In less than two weeks time, the Army Corps responded to public input in a brief letter stating, “We do not believe there would be a valid interest served or that we would receive any substantial new information.” CVEPA believes the lack of “valid interest” is by our federal agency “overseeing” the Colorado Stone Quarry in Marble. CVEPA has still not received an answer from the Corps to our pointed question: “Given your own conclusion regarding the (CSQ) violation, why is USACE (The Army Corps) treating this action as a permitting process rather than an enforcement proceeding?” None of the issues of restoration, mitigation and monitoring were addressed in the short letter. The glaring lack of oversight for operations in Yule Creek Valley is an affront to the environment and to the residents who love this valley. CVEPA will be seeking legal consultation and the help of our elected officials in defense of our watershed.

To learn more about the CVEPA mission and support us, visit cvepa.org.