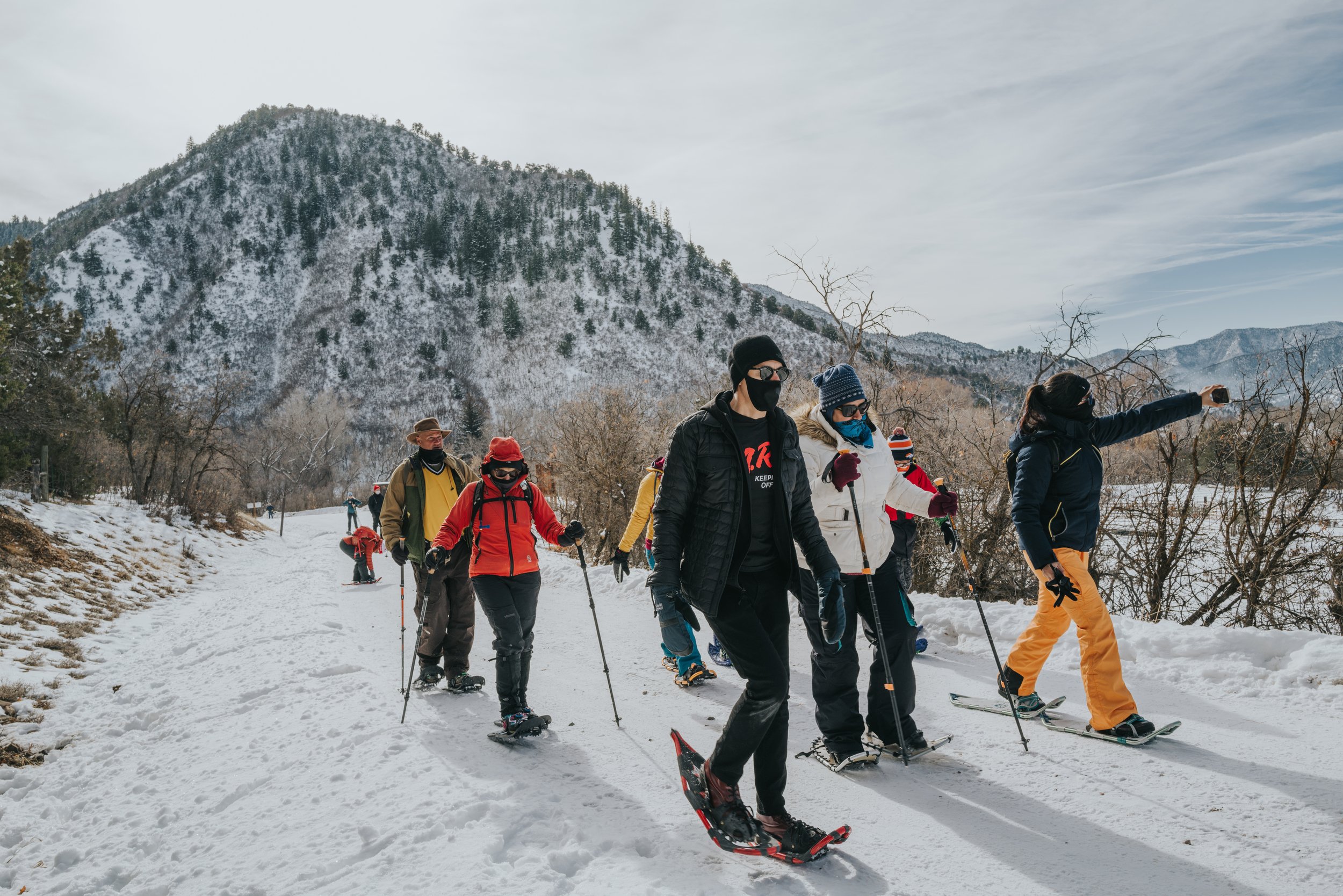 Snowshoers strike out from the Centennial trailhead in New Castle for a Wilderness Workshop-led hike. Photo by Olivia Emmer. 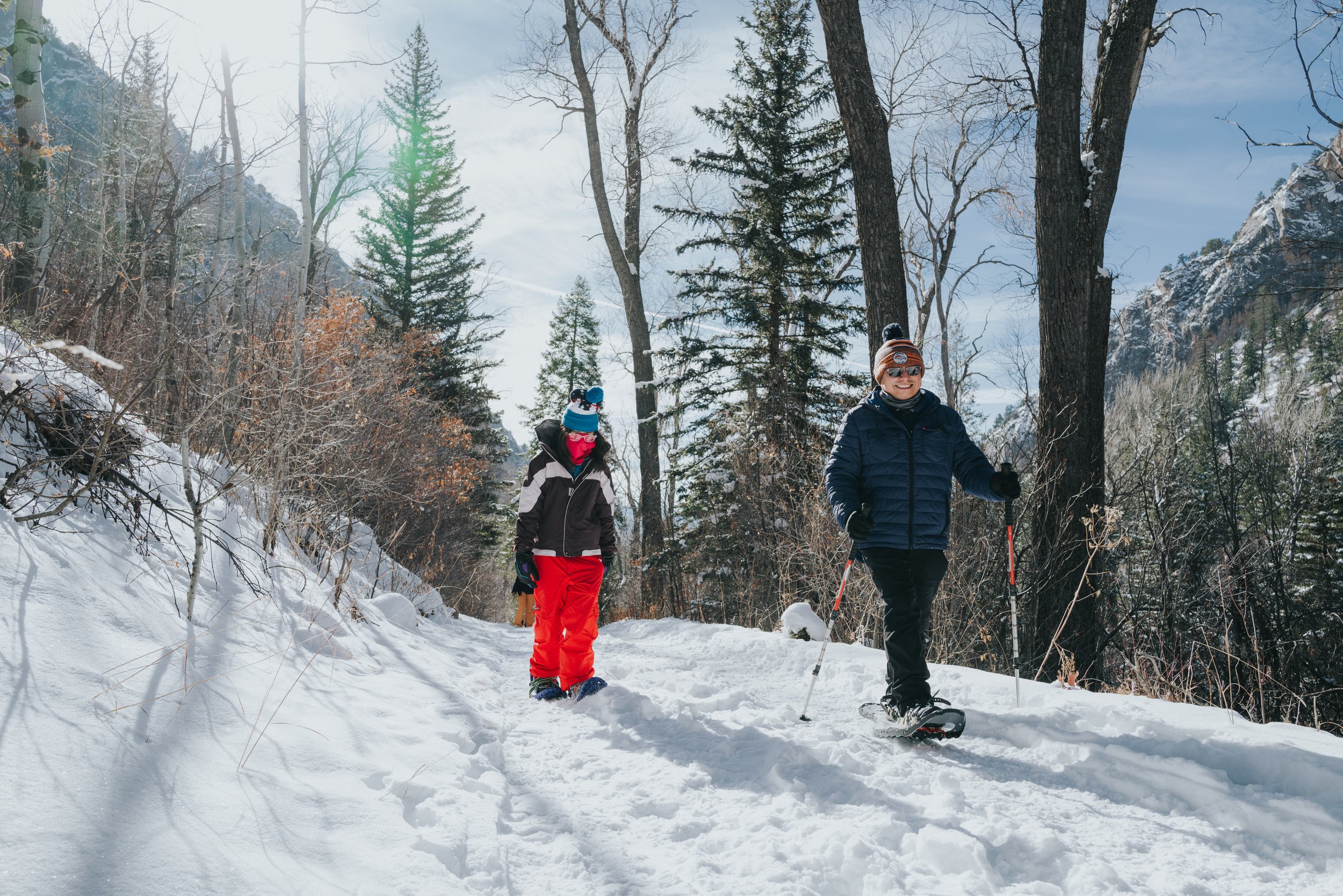 A father and daughter enjoy the Centennial, aka, East Elk Trail of the White River National Forest. Photo by Olivia Emmer.

It’s a sunny winter morning and the trailhead parking lot reverberates with upbeat chatter. English and Spanish words float through the air, and footsteps crunch on the snow as about 20 people don coats and tighten down snowshoes.

Anglo and Latino alike have gathered for a winter snowshoe hike organized by the Defiende Nuestra Tierra (Defiende) program of Wilderness Workshop. Wilderness Workshop is a more than 50-year-old environmental organization based in Carbondale, and Defiende is one of its newest programs, designed to engage the Latino community in conservation.

Beatriz Soto is the program’s director. “If we look at the Roaring Fork Valley, at this point we’re 30 percent Latino, our school district is 58 percent Latino, so it can start to show you how our demographics are changing. Now, if you have this huge part of your community that doesn’t feel part of the conservation movement and isn’t aware, doesn’t understand the policies, the barriers to use, they’re not going to have the tools and the connections to these places to protect them and fight for them and continue the conservation movement. So it has to evolve and be inclusive.”

One participant, Mekayla Cortez, had driven from Littleton with her husband and two children to join the snowshoe hike. Mekayla learned about the event through Latino Outdoors, which hosts opportunities for the Latino community to get outside and spreads the word about other organizations hosting inclusive events.

Mekayla shared, “It was such a good feeling, I actually even commented to [my husband] that to see ourselves reflected back at us and to hear Spanish speakers and to be in our circle with other Latinos was really special because we don’t get that a lot. And for me it was just great to be able to have the kids experience that and to see themselves reflected back at them.”

Mekayla and her husband Moses aren’t strangers to the outdoors. Mekayla was raised in an outdoorsy family here in Colorado. But comfort in nature and outdoor experience aren’t the only barriers families encounter to immersing themselves in the mountain lifestyle. 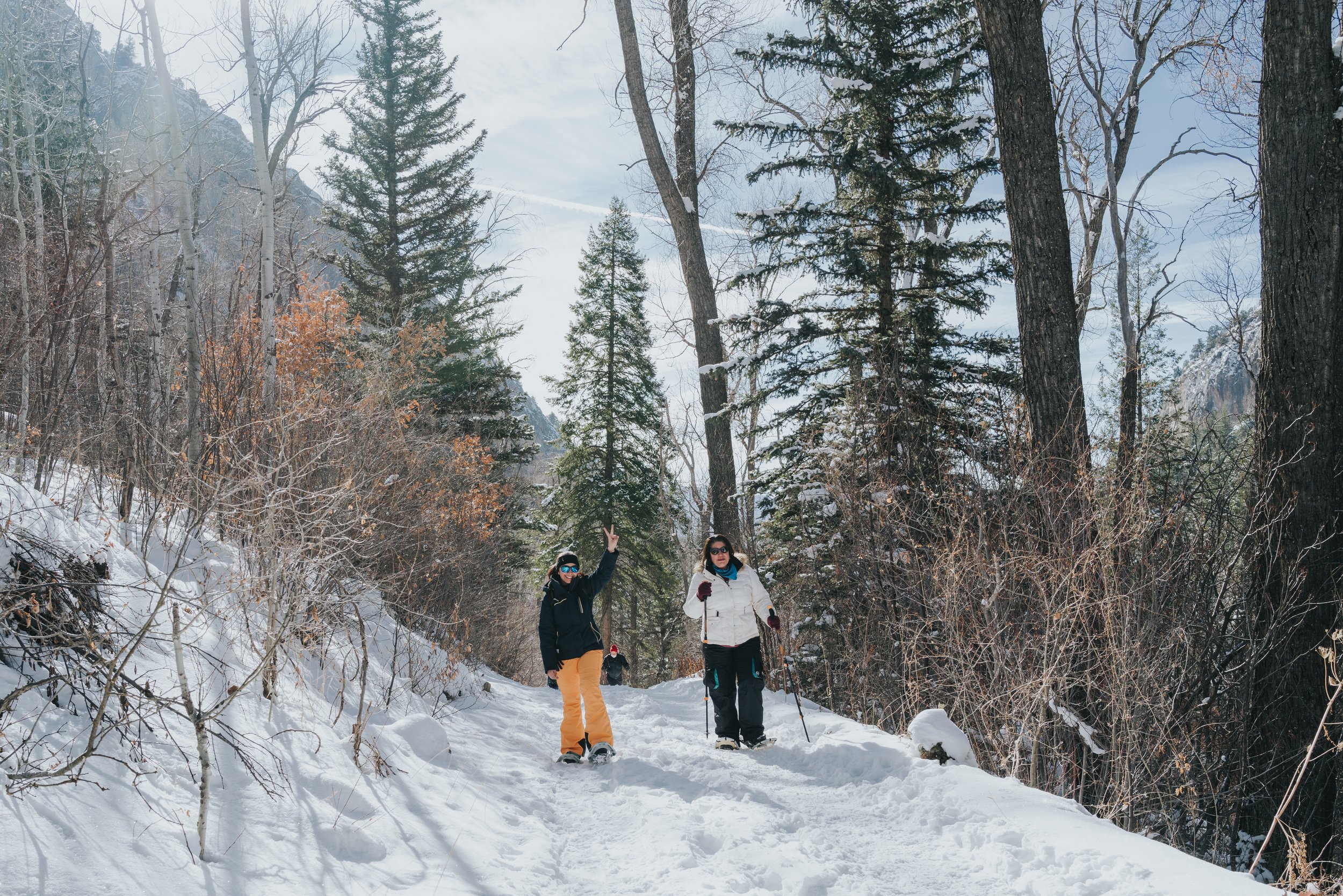 The Defiende Nuestra Tierra program seeks to expand access to the outdoors for the Latino community and engage leaders in conservation work. Photo by Olivia Emmer.

“I grew up here and I am very comfortable in the outdoors, we both are, but we don’t see a lot of ourselves represented when we are out there,” noted Mekayla. “Unless you have a bunch of money to be able to do all these activities, these kids are never going to experience this stuff. It’s just impossible – [investing in] snowshoes and gear and cold weather stuff and summer stuff and paddling and all this stuff.”

Soto partners with other organizations at the state and national level, including the Colorado chapter of Latino Outdoors (LO). One of her collaborators is Nohemi Mora, an outing leader with LO who identified time, money, gear, language barriers and fear of agency officials as common barriers to the Latino community when seeking to enjoy public land. Mora, a first generation American raised in Texas, got involved with LO several years ago. She was drawn in by their social media presence and identified with “literally the way people looked. It was brown folks with long-black hair like me that were enjoying the outdoors. It wasn’t just this super-fit athlete, decked-out in all of this fancy-looking gear, it was just everyday people sitting outside. And I was like, that is attainable.”

Mora was originally introduced to the Defiende program through her job as scholarship coordinator for the Colorado Outward Bound School. Soto invited her to attend a lecture in Carbondale by a Mexican scientist, presenting on big cat migration along the U.S.-Mexico border, and to recruit students from the Roaring Fork Valley community for the Outward Bound scholarship program.

Again, Mora: “We don’t only want to serve the Front Range but we want to be able to extend out into Colorado, so [Beatriz Soto] is the link to this community. And I think that in turn helps other organizations that want to engage the Latino community.”

Mora continued, “Sometimes Latinos don’t get to enjoy the outdoors as much as other populations, and, especially with conservation, it’s easier to get someone to care about land, water, and air if you have people engaging with land, water, and air. And in small mountain communities like Carbondale, again, for whatever reason, the Hispanic population may not engage in the outdoors in that way, but that’s why I feel like Defiende is important. Because they bring those pieces together and then they do something about [protecting] land, water, and air.”

Soto is excited about the potential of the program. “We’re hoping to expand it, where we’re doing leadership opportunities around environmental justice, conservation, public lands issues for Latino leaders, or Latino elected officials. How can we empower them to be spokesmen and stewards?”