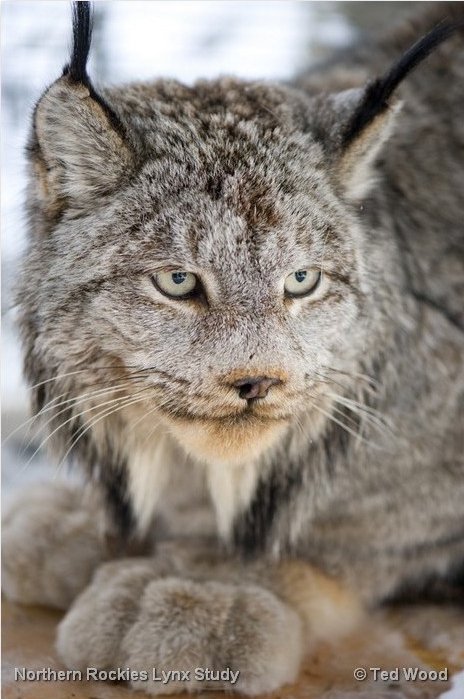 Canada lynx, similar in size to bobcats, are specially adapted to life in the snow, with large feet and long hind legs. Photo by Ted Wood.

On Feb. 4, Lucretia Olson, ecologist for the Rocky Mountain Research Station of the United States Forest Service (USFS), will present her research on lynx in Colorado as part of Naturalist Nights. This local series is hosted by Wilderness Workshop, Aspen Center for Environmental Studies, and Roaring Fork Audubon.
Olson’s work was instigated by ecologist Liz Roberts, who is with the USFS White River National Forest. In 2010, when fieldwork for the lynx study began, Roberts knew that lynx, a “threatened” species under the Endangered Species Act, were present in the forest where she worked.
Says Olson, “After the lynx was listed, we needed some more science to bridge that gap, to understand that human element, that recreated landscape that overlaps most of our quality lynx habitat.”
Canada lynx are native to Colorado but were likely extirpated from the state for several decades. Jake Ivan, wildlife research scientist with Colorado Parks and Wildlife, was also involved with the lynx study.
According to Ivan, “We have historic records of lynx in the state going back to the late 1800s, but by the mid-to-late 20th century we had very few, if any, left. The last known lynx was trapped near Vail in ’74, I believe.” As the species approached listing through the Endangered Species Act in 2000, his agency began the process of reintroduction. “That effort started in 1999 and ran through 2006. We released 218 individuals over the course of that time.”
Colorado is in the southern limit of the Canada lynx breeding range. Estimates indicate that only about 2% of the species’ range is in the lower 48. Ivan roughly estimates that today there are between 75 and 200 lynx living in Colorado. “That’s probably a relatively appropriate number, given the habitat mapping exercises we’ve gone through, and where we think we have really good habitat, and how connected it is to other patches of good habitat. I think they’ve occupied and continued to persist in the places where they should. So, it’d be nice if there were more, but I think that’s probably about what we can expect.”
Lynx rely on spruce-fir forests where their main prey species, snowshoe hare, are abundant. Lynx are specially adapted to life in cold, snowy places, and have a competitive advantage over other hare predators like coyotes and bobcats, but only when there is good snow cover that interferes with those other animals’ movement on the landscape.
The study found that while there is a limit, lynx were relatively tolerant of dispersed recreation. Olson explained, “We were surprised to find a nuanced response to recreation from lynx. So they definitely weren’t doing really strong avoidance behaviors that we expected. They did small things, like shifted to be more active at night, or moved away from really highly motorized areas, but then with some recreation, like backcountry skiing, they were right on top of the backcountry ski trails. They didn’t seem to mind that at all.” This tolerance had a threshold though, and the study showed that developed areas, like ski resorts, had lynx avoiding that habitat until those areas closed for the season.
The study told the researchers as much about how humans use the winter landscape as lynx. Humans in the dispersed recreation areas volunteered to carry GPS units, and their movements were tracked on the landscape in the same way the collared lynx were. As Roberts shared, “We’ve got this tool where we can actually show you how different user types, whether it’s a helicopter skier, a snow shoer, a backcountry skier, a snowmobiler, we can show you how they select and use terrain.” It has been useful to better understand how different types of recreationists use the landscape, not only in wildlife management but in managing trail intersections and other safety concerns in mixed-use areas.
The study ended in 2014, and since then, numbers in backcountry recreation have continued to grow dramatically. New technology, like snow bikes, has been released. Snow bikes in particular may change the footprint of mechanized recreation, by allowing faster movement through lynx habitat than skiers and skinners, while also allowing more forest access than larger machines like snowmobiles.
While many believe lynx populations in Alaska and Canada to be healthy, the future of lynx in Colorado is uncertain. Some scientists believe that the southern extent of the Canada lynx breeding range is unlikely to persist in a warmed climate.
Ivan explained, “If we get a huge fire in the wrong place, that really knocks out lynx habitat for a long, long time. It takes a long time for all that [forest] to regenerate to a point where lynx will use it. That’s an unknown wildcard that seems like a bigger and bigger risk every year.” In addition to wildfire, climate change exerts other forces on lynx survival, like warm temperatures and reduced snowpack, lessening the lynx’s competitive advantages.
To learn more, RSVP for the virtual presentation at aspennature.org/naturalist-nights. This free lecture takes place on Thursday, Feb. 4 at 6 p.m.