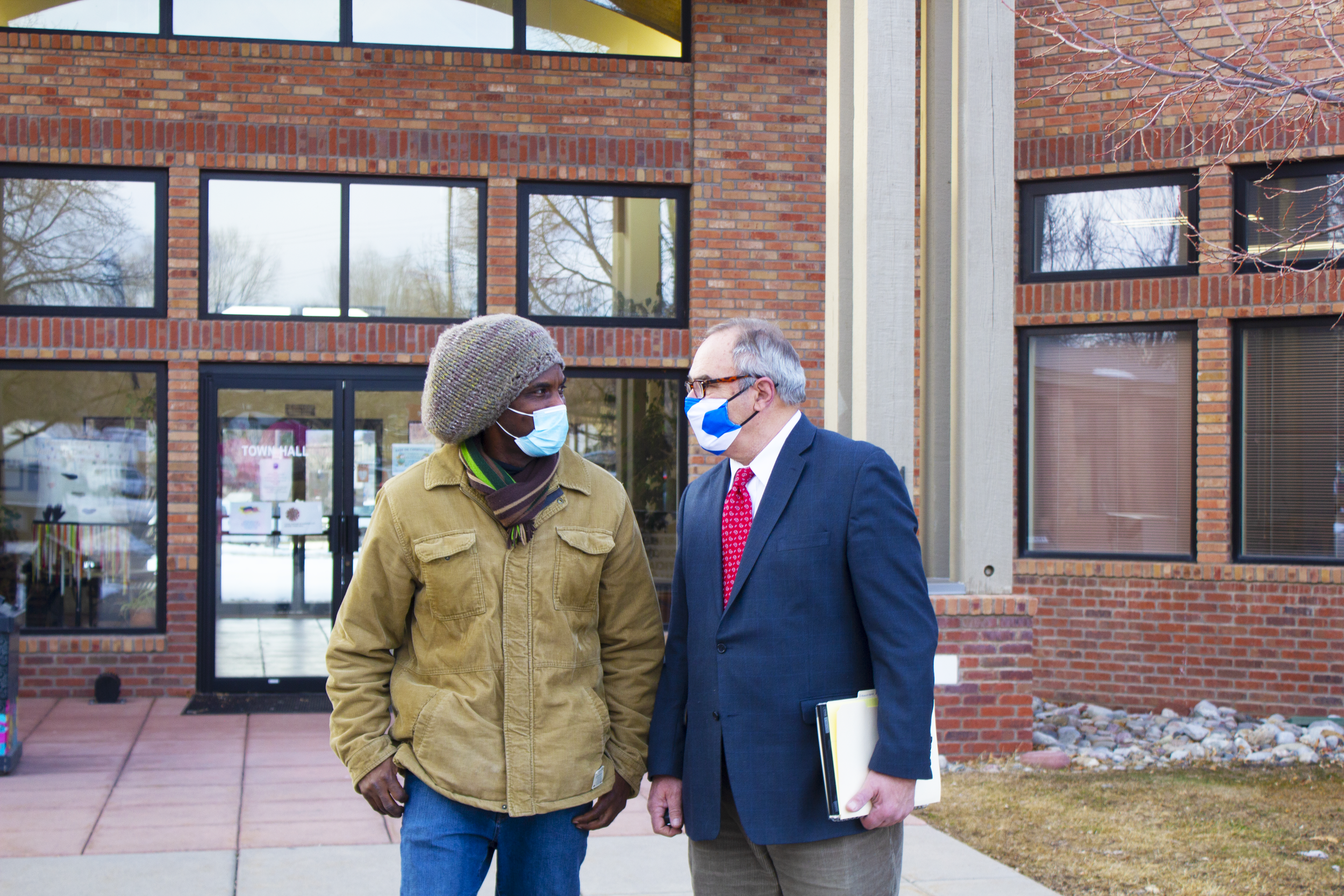 Michael Francisco speaks with his attorney Michael Edminister after a hearing on Feb 8. Photo by James Steindler.

Michael Francisco has lived in Carbondale for 10 years. He grew up in Belize, where his father was a police officer, before moving to Los Angeles (LA) when he was 15. He is currently 54 years old. In Belize, Francisco was not familiar with racial profiling as a law enforcement issue. It was not until he moved to LA that other Black men and women taught him it was best to steer clear of men and women in blue.
Prior to the pandemic he worked with special needs students and English as a Second Language learners through the Roaring Fork School District. The virus took away the need for this position so he began working nights for City Market (CM) in Aspen. He was recently promoted as the floral manager there. Carbondalians who tune into KDNK on Sundays from noon to 2 p.m. may know his radio show: Reggae Wave-o-lution.

Christmas Eve 2020
It was a quiet Christmas Eve at CM in Carbondale. Francisco had finished gassing up at the fuel center before entering the store with a friend. Upon entering, he noticed the store’s general manager (GM) sorting cake displays. He knows the GM through work and as he caught their eye it did not appear that anything was awry.
Police Chief Kirk Wilson also happened to be there picking up a couple of last-minute items for his wife’s Christmas stocking. Before leaving, he was waved down by a front-end manager. It was relayed to the Chief that another employee inside the fuel center felt uncomfortable due to a customer’s alleged behavior.
Francisco’s defense attorney, Michael Edminister, shared that the police reported that two employees were inside the fuel center, the station manager and an associate. Apparently, the associate felt uncomfortable after allegedly being pointed at and looked at angrily by a Black man paying at the window. The complaining witness (CW) later explained to police that the fuel station manager, who took Francisco’s payment, likely did not see the alleged grimace and gesture because they had their head down at the time — therefore would not be able to corroborate the accusation.
Furthermore, during questioning the CW described a previous situation where she felt uncomfortable; an experience which allegedly involved another man who also was Black.
Inside the store, a front-end manager requested that the suspect be removed. The chief initiated a call and two additional officers soon arrived. Wilson briefly convened with his recruits before leaving the premises. According to the chief, the front-end manager pointed out Francisco.
Wilson maintains that the goal was to get Francisco to leave and not to instigate an arrest. However, by the time the two remaining officers contacted Francisco he was already at the self-checkout, had finished scanning his first item and, as the Chief acknowledges, was preparing to presumably exit.
Still, the officers told Francisco that he was trespassing and management wanted him gone. Francisco was confused; he knew the GM , and had just seen them a few minutes before. He tried explaining this to the officers and indicated that he would like to get to the bottom of what was going on. A distinction here is that the police had mostly been in contact with a front-end manager, not the GM — potentially having caused confusion.
The officers asked for Francisco’s ID which he refused to reveal and insisted that he had done nothing wrong. Francisco remembers then asking the police if he was free to go and them saying no and telling him to place his hands behind his back. Francisco did not comply and the officers forced him to the ground where he laid face to the floor while being restrained. Chief Wilson — after being called again for backup — arrived on scene along with a fourth uniformed officer.
Francisco says, “It was like being thrown into a movie scene but no one gave me the script.”
Police proceeded to search Francisco which included removing his rasta cap or “tam” and rummaging through his dreadlocks. Francisco informed the officers that the cap was a religious symbol and should remain on his head. According to Wilson, he then placed the cap back onto the restrained man and attempted to tuck his dreads back underneath. Wilson states that had it been a woman with long hair, they’d have done the same thing.
At about this time, longtime resident Kendra Ford stumbled upon the scene. “It seemed to me like he had no idea what was going on,” Ford stated. She described it as, “beyond humiliating,” to see Francisco on his knees with two officers on each side while another, albeit in a calm voice, spoke down to him.
Handcuffed, officers escorted Francisco out and secured him inside one of the three patrol vehicles before transporting him to the police station whereupon he was later released with a complaint and summons for 1) Disorderly Conduct (for the alleged pointing), 2) Resisting Arrest and 3) Obstructing Government Operations.
Francisco emphasizes, and the police have not confirmed otherwise, that he was never made aware of the nature of the accusation against him that evening.

Follow-up
Francisco appeared in Carbondale Municipal Court on Feb. 8 with his attorney. At the hearing, town prosecutor Angela Roff expressed she would like to obtain copies of materials from an internal investigation done by CM in response to the incident.
The Chief wants to assure the community that the department acted on the premise that a man was accused of behaving inappropriately and not based on the color of his skin. He states that it would be very upsetting to him personally, and the department, to ever find out about witnesses exaggerating or fabricating testimony.
However, the chief states that the video they viewed from CM, “Clearly shows him [Francisco] pointing his finger,” outside the fuel center.
Wilson also mentions that one of the initial detaining officers was in training and fresh out of the academy.
Carbondale Police Department (CPD) and its officers, according to Wilson, partake in “implicit bias” and “anti-bias” training regularly. Many trainings are online through Police One Academy. The state of Colorado only requires four hours of anti-bias training every five years for law enforcement, which Wilson believes is incredibly insufficient.
He acknowledges the current pervasive climate surrounding race and police violence. “That is not us,” he affirms. “This department is full of good people that want to do a good job; and I want to make sure that he [Francisco] was not put in a situation unjustly.”
The chief has been outspoken in the wake of the death of George Floyd. He issued a statement to the community over the summer of 2020 which expressed his disdain over the actions of the Minneapolis police officers. In the statement he also brought up the Citizens Police Academy which is now offered in Spanish and English. He implores locals to participate in the program and, “Learn about the CPD from Carbondale Officers.”
“I’m certainly aware of what’s going on in this country but I am proud that’s not in our officers’ mindset,” the Chief concluded.
Francisco’s next court date is March 8 at 4:30 p.m. He intends to plead not guilty.