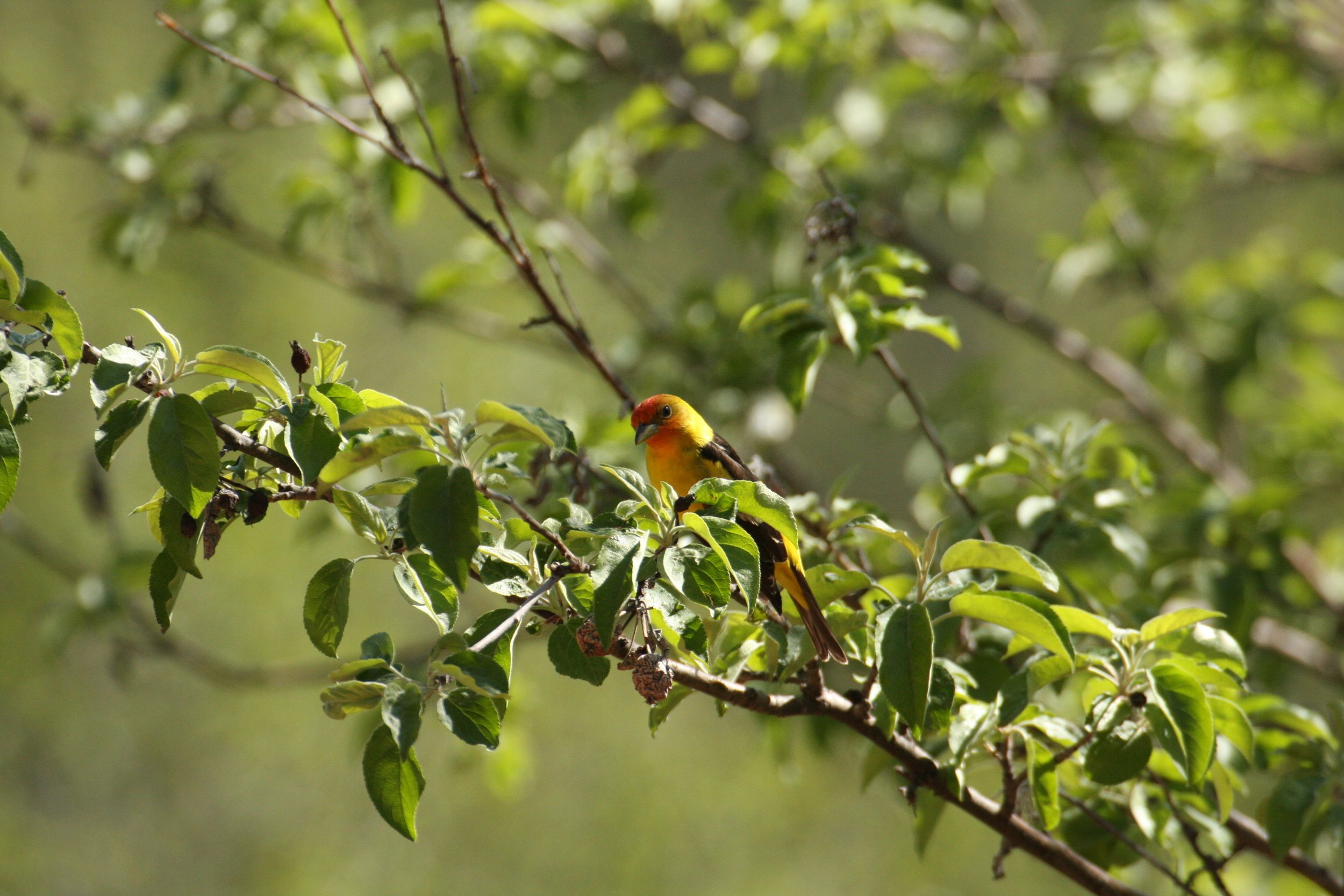 The world’s largest animal migration is coming to North America! A portion of this migration will pass right through the Roaring Fork Valley; and, lucky for us, many will remain to breed, most of them returning to the very same habitat patch where they were born!
Bird migration is one of the great wonders of the natural world. Roughly one in five bird species migrates. Our tiny broad-tailed hummingbird from southern Mexico and the large Swainson’s hawk returning from its winter home in Argentina’s pampas are among many coming to create new generations in our valley.
These epic journeys are nothing less than astonishing; it’s an almost unbelievable feat of endurance, strength and stamina. Consider the improbability of a tiny, third-of-an-ounce warbler safely finding its nesting site after flying thousands of miles and braving storms and predators only to make the return trip a few months later.
The journey is undertaken for the crucial task of reproduction. They must migrate to feast on the explosion of riches our northern summers provide. These warblers eat insects from dawn until dusk, gathering food to raise a family and, hopefully, enough energy for the return trip.
Imagine our forests without these hard-working birds voraciously consuming insects that can threaten native plants. They tend our native plants by controlling insects and pollinating and propagating to keep everything in balance. They’re our natural gardeners!
Migrating birds follow set routes that include habitats to stop, rest and refuel along the way. Many different birds share similar routes, creating worldwide bird “superhighways.”
One of the greatest mysteries of migration is how birds find their way. Scientific studies on a number of bird species reveal several different techniques of bird navigation.
The American Bird Conservancy shows a few of these methods:
• Magnetic Sensing. Many birds have special chemicals or compounds in their brains, eyes or bills that help them sense the Earth’s magnetic field. This helps the birds orient themselves in the right direction for long journeys, just like an internal compass.
• Geographic Mapping. Because birds follow the same migration routes from year to year, their keen eyesight allows them to map their journey. Different landforms and geographic features such as rivers, coastlines, canyons and mountain ranges can help keep birds heading in the right direction.
• Star Orientation. Night migrators use star positions and the orientation of constellations can provide necessary navigation directions. In daytime, birds also use the sun to navigate.
• Learned Routes. Some bird species, like sandhill cranes and snow geese, learn migration routes from their parents and other adult birds in the flock. Once learned, younger birds can travel the route successfully themselves.
Large migrators like hawks and eagles can use day-time thermal currents to assist them, but most songbirds must travel at night to avoid predators and to keep cooler as they fly.
Although these skills make migration easier, the journey is perilous. It’s estimated that more than 60% of some bird species never complete a full round-trip migration. Our birds also face so many human-caused threats along the way, it’s amazing they can make it at all.
It’s a tough time to be a bird. In the last 60 years, we have lost a third of our birds. Among the many human-caused perils are the loss of critical refueling stops due to habitat destruction, night lights, windows, windmills, pesticides and predators upon landing.
Windows are usually invisible to birds, and fatal collisions occur with frightening regularity. These collisions account for up to one billion bird deaths in the United States each year.
Upon landing, migratory birds need to be wary of natural predators and domestic and feral cats. Free-roaming cats threaten birds worldwide. They were introduced into the United States several hundred years ago and are now the biggest human-caused threat to birds, killing approximately 2.4 billion wild birds each year.
The first two weeks of May are peak arrival time for birds. They each busily settle into their preferred habitat of pinyon and juniper, aspen, spruce/fir, riparian, wetland, meadow, shrubland, even above tree line.
Our native birds need strong voices for conservation and restoration of habitats, and those with available water are especially important as we face climate change. Talk to family, friends and officials about encouraging building codes to prevent window collisions and pet- control legislation. “If you take care of the birds, you take care of most of the big problems in the world,” says Dr. Thomas Lovejoy; and I agree.
Get outside and enjoy the magic of the birds in our mountains with a new-found appreciation for the epic journey they made to get here!
Since most of our migrating birds arrive from Latin America: ¡Disfrute de la primavera con tus pájaros! (Enjoy the spring with your birds!)