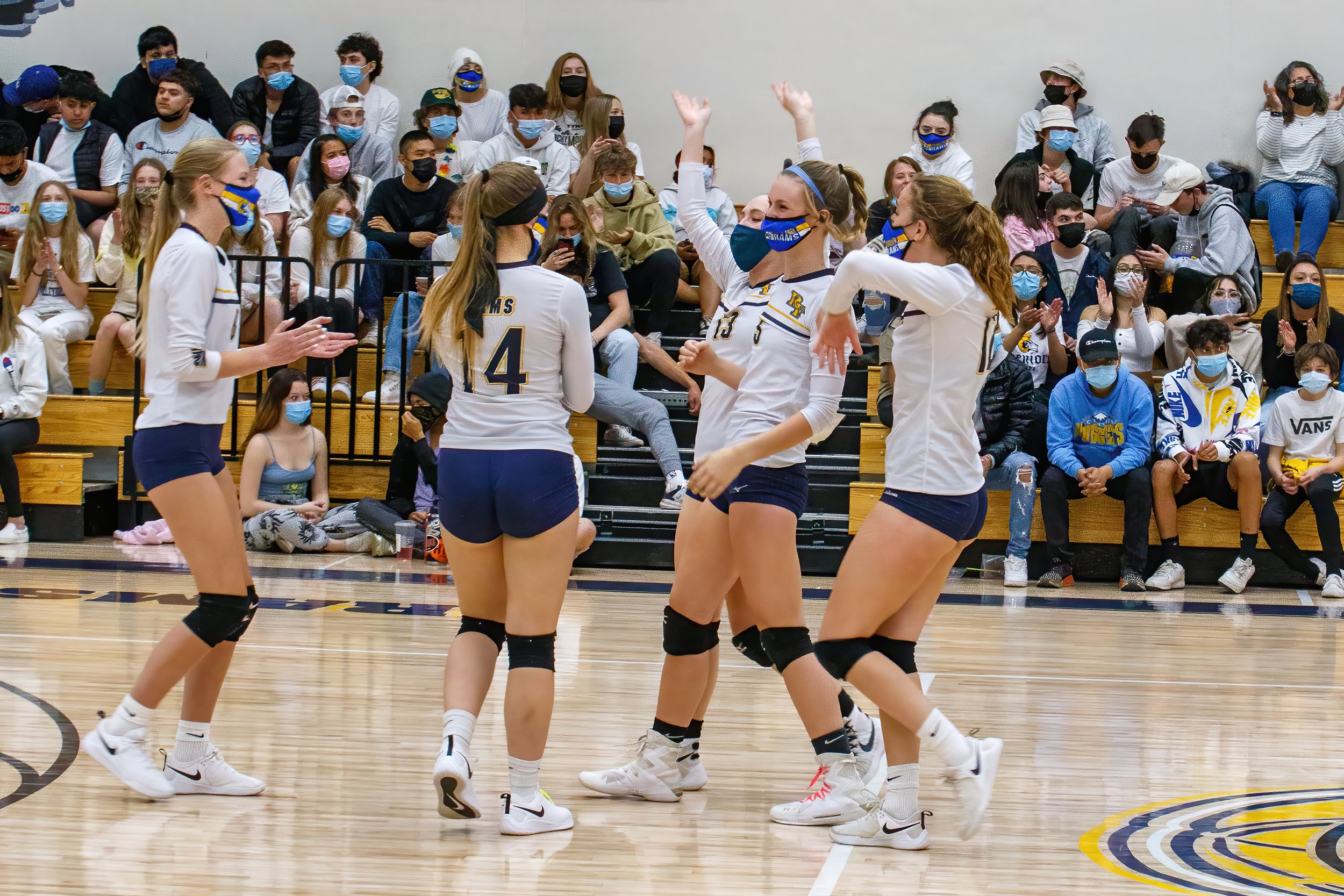 Rams volleyball players showed great energy in their game against the Delta Panthers on April 22. Photo by Sue Rollyson.

Last Thursday was Senior Night for varsity girls’ volleyball at Roaring Fork High School (RFHS). The formidable Delta Panthers would leave town with a victory in tow; however, no loss could dampen the spirits of a team that has formed closely-knit bonds over the season.

Volleyball, usually a fall season sport, was shifted to being played in March and April, as directed by the Colorado High School Sports Association, the state’s high school sports governing body.

Karen Nieslanik Crownhart coached about 15 years ago for four seasons and then had her daughter, Letey, now a senior and the team’s captain. When Letey got to high school, there was an opening for varsity head coach, so Nieslanik Crownhart stepped in.

A 1991 RFHS graduate, Nieslanik Crownhart played on the volleyball team that went to the state tournament. She was also a member of the RFHS basketball team, which won state tournament titles in 1989, 1990 and 1991.

“There’s just a lot of history here in sports and knowing the love that they bring to your life past the gym. That’s why I want my girls to be involved,” said Nieslanik Crownhart, “To get out of it all the life lessons.”

Coreen Norwood is this season’s new assistant varsity and head junior varsity coach for RFHS girls’ volleyball. She is in her first year at the school, working this semester as a special education teacher. From Fort Collins, she played volleyball in high school and college and coached at the NORCO Volleyball Club and youth recreation leagues in North Carolina.

New to Carbondale, Norwood said, “I really like the family, community feel.”

Focusing on the team’s progress, Norwood explained, “Whenever I’m coaching my girls in a game, I just try to look at the bright side of the improvements I see in each competition and practice.”

Two of those seniors spoke to The Sopris Sun about this year’s sense of camaraderie.

Samantha “Sam” Ferry, who will be attending Eckerd College in Florida this fall, said, “It’s kinda crazy that it’s over, but it’s good at the same time.” What she takes away from this season is “a lot about leadership roles and how to take charge of things just because I’m older now and I have to be a role model for the freshmen, and I have to be willing to use my voice to do that.”

Ferry said younger players looked up to seniors as mentors because “it’s been hard for the freshmen this year because we started school online and they didn’t get a proper introduction to high school.”

Grace Jardine, who will attend the University of Colorado Boulder, started playing volleyball in seventh grade at Carbondale Middle School.

Jardine said, “Out of all the years I’ve played volleyball, this is the best year I’ve ever had. I think it’s a lot to do with COVID and really being able to appreciate that we get to play the sport and I get to be here with my friends, it’s really changed my life perspective. I think our team has the most fun friendship and community that I have seen, ever.”

The students and school staff, Jardine continued, have been unwavering in their support for the team, and so have her teammates. “Even when this hasn’t been our best season ever, everyone has shown up, and everyone’s here to play and having fun. It’s been a blast.”