Seeking Higher Ground: Knocking skeletons out of the family closet 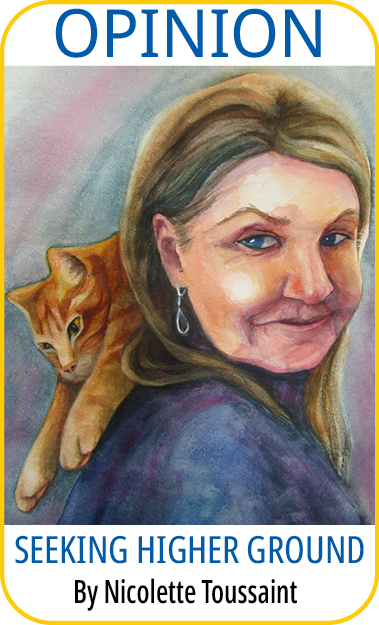 In 1987, in a fit of feminist righteousness, I changed my surname to Toussaint. I was filing for my third divorce and tired of name changes. Having chaired a “women’s own name task force” a decade earlier, I knew that barring “intent to defraud,” anyone can change their name anytime by making a “public declaration.”

Even in the seventies, I thought that faddish name-changes – like Cooperman/Cooperperson and Wolfson/Wolfsdottir – wouldn’t stand the test of time. So I decided to choose a family name. Trouble was, rich families leave better paper trails than poor ones, and my family tree came from my father’s wealthy family. Then again, everyone’s family trees are patronymic; women’s names disappear.

I settled on a token protest – taking the surname of my mother’s adoptive father, Eugene. Gene Toussaint was the kindest, most reliable male I had known and, as resemblances make clear, I have always been my mother’s daughter.

The first time I wrote my explosive new initials – TNT – I laughed out loud.

Many elders review their lives, writing memoirs and making sense of their lives. I have been doing that, and my mother, Myra Toussaint, did the same. In one note, she reflected on her name. Her birth name was changed even before she started school. Myra Dean Shields became Myra Jean Toussaint. Marriage added other surnames: Slusser, Devine, Toussaint-Devine. Everything changed but the Myra part.

I empathize. During my 69 years, my surname has changed FIVE times. My first name changed only once, when I came home from school and announced that henceforth, I would be using my middle name in preference to my always-mispronounced first name. But I was the driver behind all my name-changes. My mother wasn’t. Until she hyphenated Toussaint-Devine late in life, she didn’t have a choice. She had to jump through hoops to get a passport due to the fact that she’d never been able to find her birth certificate. Her mother, Mamie, said it was destroyed when the courthouse burned down.

Myra always felt that something was amiss with Mamie. Her mother was reclusive, wouldn’t let her play with other children, and socialized only with family. It was almost as though she was in hiding. At various times, Myra theorized that she was the daughter of one of Mamie’s sisters, or that she had been abducted from a wealthy family. (Around that time, there were a rash of such kidnappings in imitation of the Lindbergh baby case.)

Myra maintained that she actually REMEMBERED being passed out of a window as a small child.

While watching the PBS series “Finding Your Roots,” I recently realized that online documents might shed some light on my mom’s dark imaginings, or at least on the reasons behind them. Old census and newspaper records not only did that, they lit a fuse under my TNT initials, busting some skeletons out of the family closet.

Following my family’s paper trail, I learned that I COULD have claimed to be a legacy student at CU Boulder – had I only known that my great uncle graduated from CU in 1911! Then I discovered that I had earned a master’s degree at Illinois Institute of Technology while having no idea that my father was an alum. Or that my parents met there in 1944!

My father, whose family had traced its lineage back to the Revolutionary War, never mentioned anything recent. He was proud that Downer’s Grove is named after his great-great grandfather, and his stuffy family glowed about obituaries that referred to them as an “old Illinois family.”

That’s an odd phrase. As DNA shows, EVERY human family is equally old. I guess you get termed “old” if you’re fortunate enough to be able to enumerate your ancestors, or if local landmarks bear your name. (Kinda like being a Gianinetti in Carbondale, which has a Gianinetti Park.)

Last week, I found my mother’s birth certificate. It confirmed that Mamie Gowens and Casper Shields were her parents. But online research also showed that Myra was right about the abduction! In July 1928, when she was a toddler, her mother ran away from her husband Casper, taking Myra and $700 in savings. What’s more, Mamie ran away with Eugene Toussaint, her next door neighbor! Eugene was, inconveniently, already married to a woman named Fanny.

In 1928, THAT was a big scandal. The story’s still there, in the archives of the Hammond Times.

Highly miffed, both Fanny and Casper got divorces. But I’m pretty darn sure that with the arrival of the Great Depression, Myra was never legally adopted. Considering Mamie’s possible intent to defraud and lack of public declaration, that might mean that the name Toussaint was never legally attached to my mom at all.

The laugh’s on me. Maybe I should change my byline to Nicolette Myrasdottir?