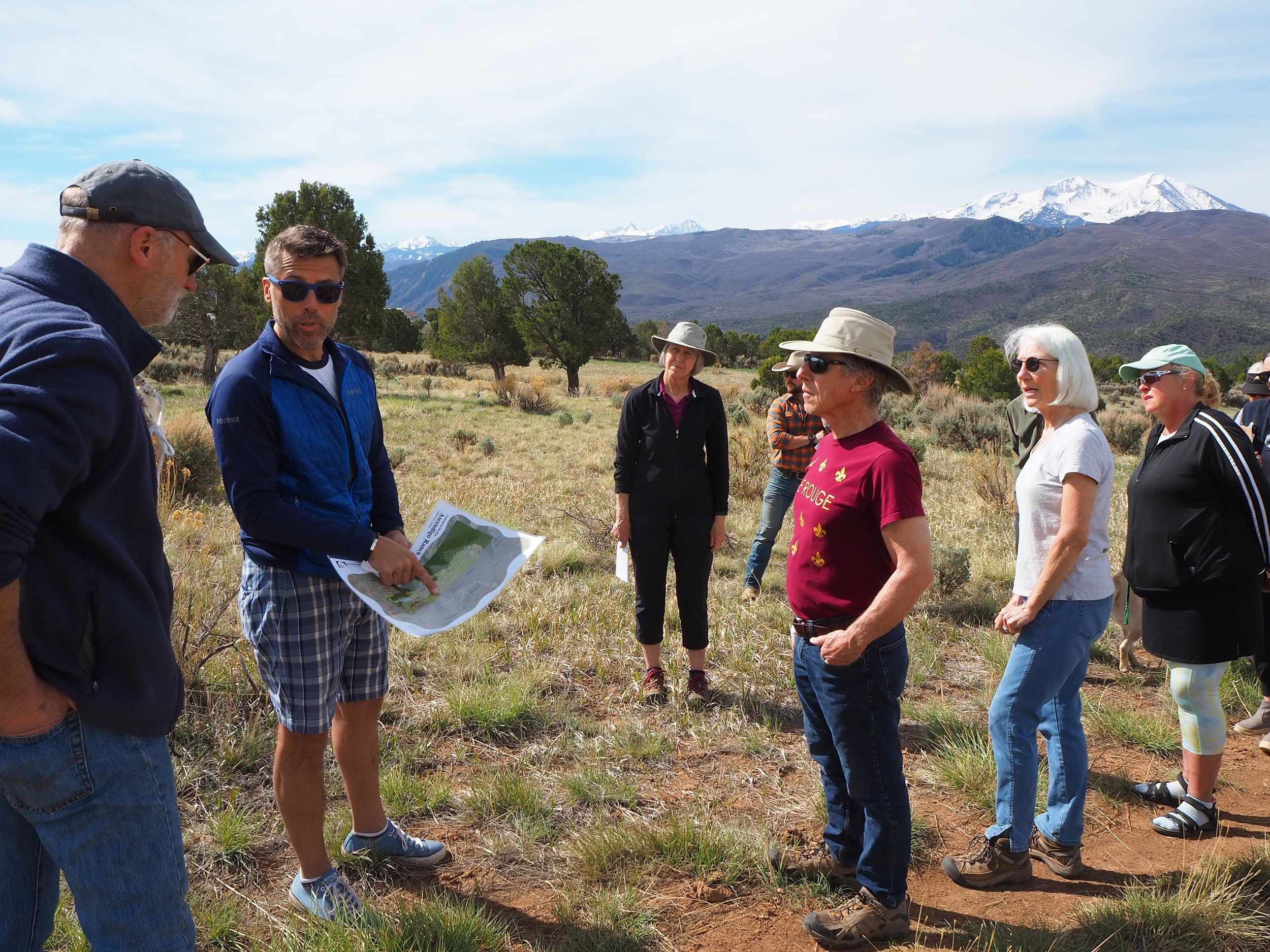 Ascendigo CEO Peter Bell demonstrates on a map where their proposed development would place buildings. Photo by Raleigh Burleigh.

At the end of Harmony Lane, four miles up Missouri Heights from El Jebel — or five miles from Highway 82 on Catherine’s Store Road — a small crowd gathered on a pleasant Saturday morning. The meeting consisted of representatives for Ascendigo Autism Services and Missouri Heights residents, along with others curious to know more about the proposed therapeutic summer camp/ranch development. It was the third of such meetings hosted by Ascendigo in response to an outpouring of vocal opposition to their proposal.

“We hope the benefits outweigh the impacts,” began Ascendigo Chief Operating Officer Dan Richardson. Almost immediately, residents chimed in to question the benefit that Ascendigo would bring to their neighborhood. Richardson responded, “Laughter and vitality,” and “we’ll improve Harmony,” referring practically to the road in and perhaps aspiring that the metaphor result true as well.

For many weeks, neighbors organized as Keep Missouri Heights Rural (KMHR) have written to local newspapers, concerned about impacts including increased fire danger, traffic, noise and light pollution. As drought conditions persist and worsen, perhaps the greatest concern is water. As of May 5, KMHR’s petition had garnered 478 signatures.

The proposal in question includes some 42,000 square feet of constructions across 126.8 acres belonging to the Carbondale-based nonprofit which serves individuals on the autism spectrum. The development is planned to occur in phases over three years: Phase 1 installs a caretaker dwelling unit and equestrian facility; Phase 2 builds out the day camp with a playing field, basecamp building and activity barn; Phase 3 introduces overnight stays with camper and staff lodging; and Phase 4 would add a pond feature and guest cabin.

Standing among the neighbors, among aromatic fields of sage, reverence for this land comes easy. One understands the opposition’s determination to protect it. Still, information cited in opposition letters portrays a notably different reality than Ascendigo’s assurances.

Ascendigo’s proposal does not involve rezoning per se. Educational use is allowed in the existing rural district by Garfield County if a limited impact review is approved by the commissioners. Nonetheless, the use is clearly different than residential. Campers, as well as most employees, would come and go with a sole caretaker living fulltime on the property.

Some neighbors expressed a preference for more homes, versus an operation more akin to a business, belonging to a nonprofit corporation with a multi-million dollar budget.

Another point of concern is whether this proposal truly depicts the “full buildout.” According to Ascendigo, the proposal shows a completed project, including the controversial irrigation-fed pond which tour-goers were told is not guaranteed even if the rest of the project receives approval.

Perhaps the greatest discrepancy is Ascendigo’s assertion that the properties in question — Whitecloud Ridge (already subdivided into 13 lots on 79.5 acres) and Harmony Heights C (6 acres) and D (41.29 acres) — would otherwise be developed into 21 single family homes, plus two ADUs. This projection, calculated by Robert Schultz Consulting, according to Ascendigo CEO Peter Bell, is a plausible but not imminent scenario. Keep Missouri Heights Rural would sooner cite 13 homes as the figure, erring on the opposite end of possible alternatives. In the words of Missouri Heights resident Kimala Fite, “Studies are only as good as the assumptions they’re based on.”

Even given the 23 dwelling unit possibility, neighbor Kirk Hartley points out that Ascendigo’s traffic study assertion of 269 peak-day vehicle trips seems bloated. That’s nearly a dozen vehicle trips per home. Asendigo’s projected peak-day vehicle trips, 210, is based on outlier event days, which they state would occur twice per year with up to 150 people. Otherwise, max capacity is capped at 24 campers and 48 staffers during the summer weeks, with 94 parking spaces across the landscape. Ascendigo says they do not plan to rent the facilities to other groups and will not host conferences.

Touring the hills, Ascendigo Director of Development Julie Kaufman clarified another point of confusion. Previously, a consultant with “poor information” stated that hospital services may be needed one to two times per week. In fact, as confirmed by reports reviewed by The Sopris Sun, there have been only three incidents since 2007 at Ascendigo’s summer camps requiring immediate medical attention.

Regarding fire danger, neighbor Robert Sardinsky, a 24-year resident of Missouri Heights and 33-year volunteer with Roaring Fork Fire Rescue, challenged Ascendigo to go above and beyond code for fire mitigation. Richardson requested that Sardinsky provide feedback to make their proposal as “firewise” as possible. Sardinsky complied, “as an interested party, not expert,” and suggested aggressive strategies and prevention plans beginning with construction practices.

Ascendigo also stated that their premises would adhere to International Dark-Sky standards, with ground-facing fixtures and motion sensors, to minimize light pollution.

Representatives of Ascendigo attributed changes in their proposal, the same that some opposition regards as suspicious, to accommodations made for the sake of being good neighbors and fitting in with the rural peace of Missouri Heights. The conversation is scheduled to begin with Garfield County Commissioners on May 10, followed by another site visit.