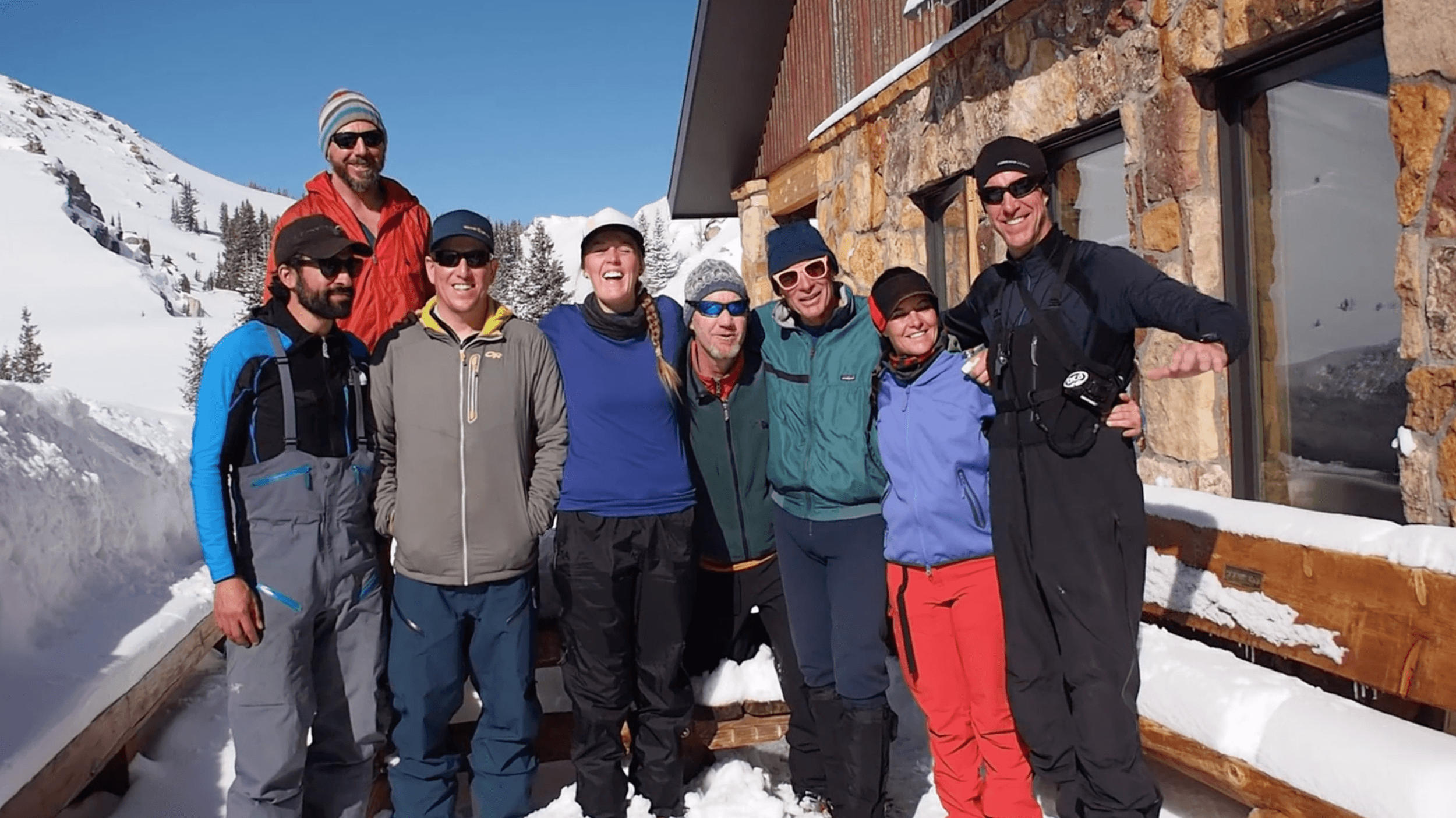 The team accompanying John Seipel (third from the right) on the hut trip documented in "It's All Uphill From Here." Still by Hamilton Pevec. 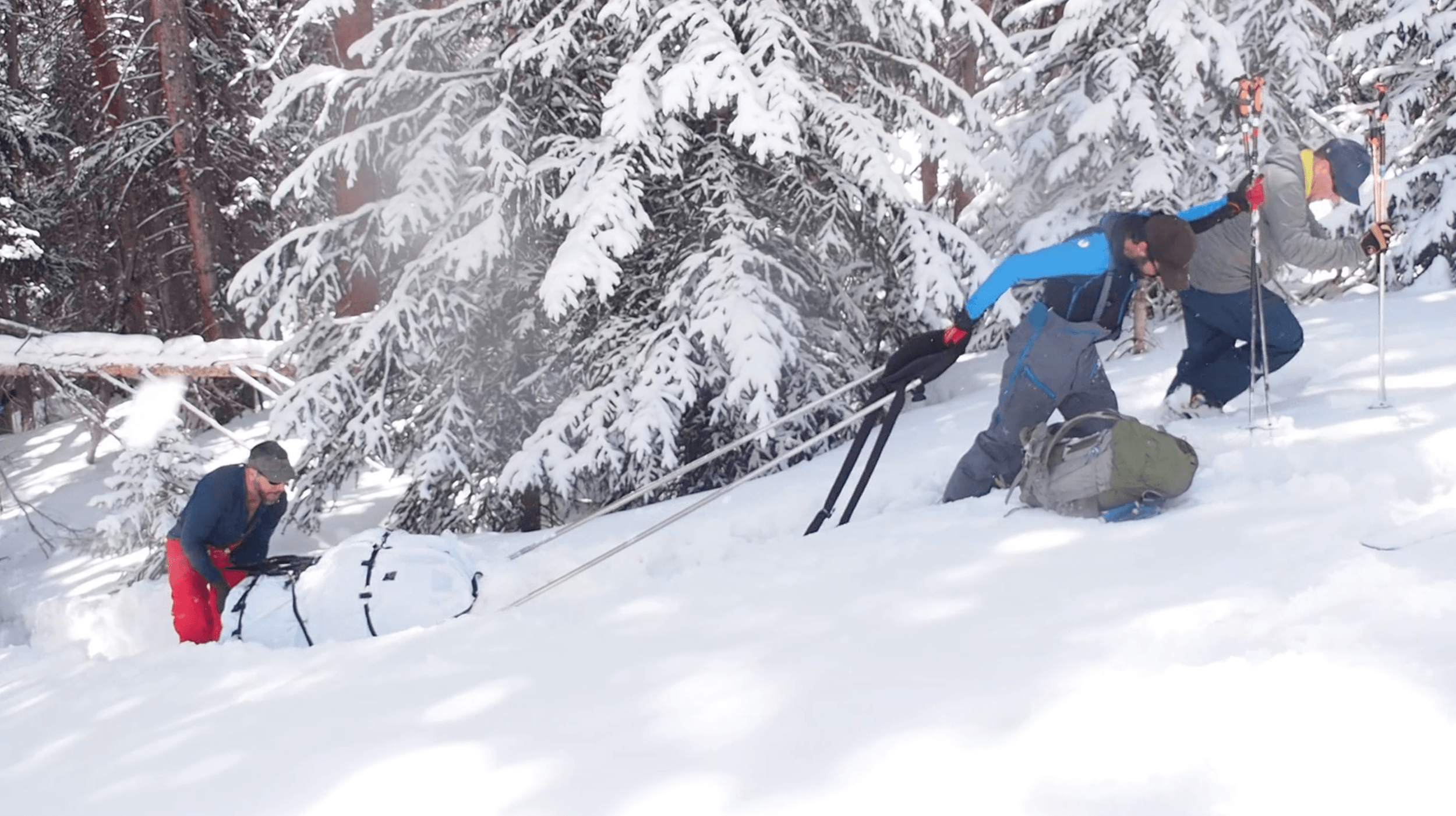 Hut trip members hauling supplies up a slope in a pulk ; scene from the documentary "It's All Uphill From Here." Still by Hamilton Pevec. 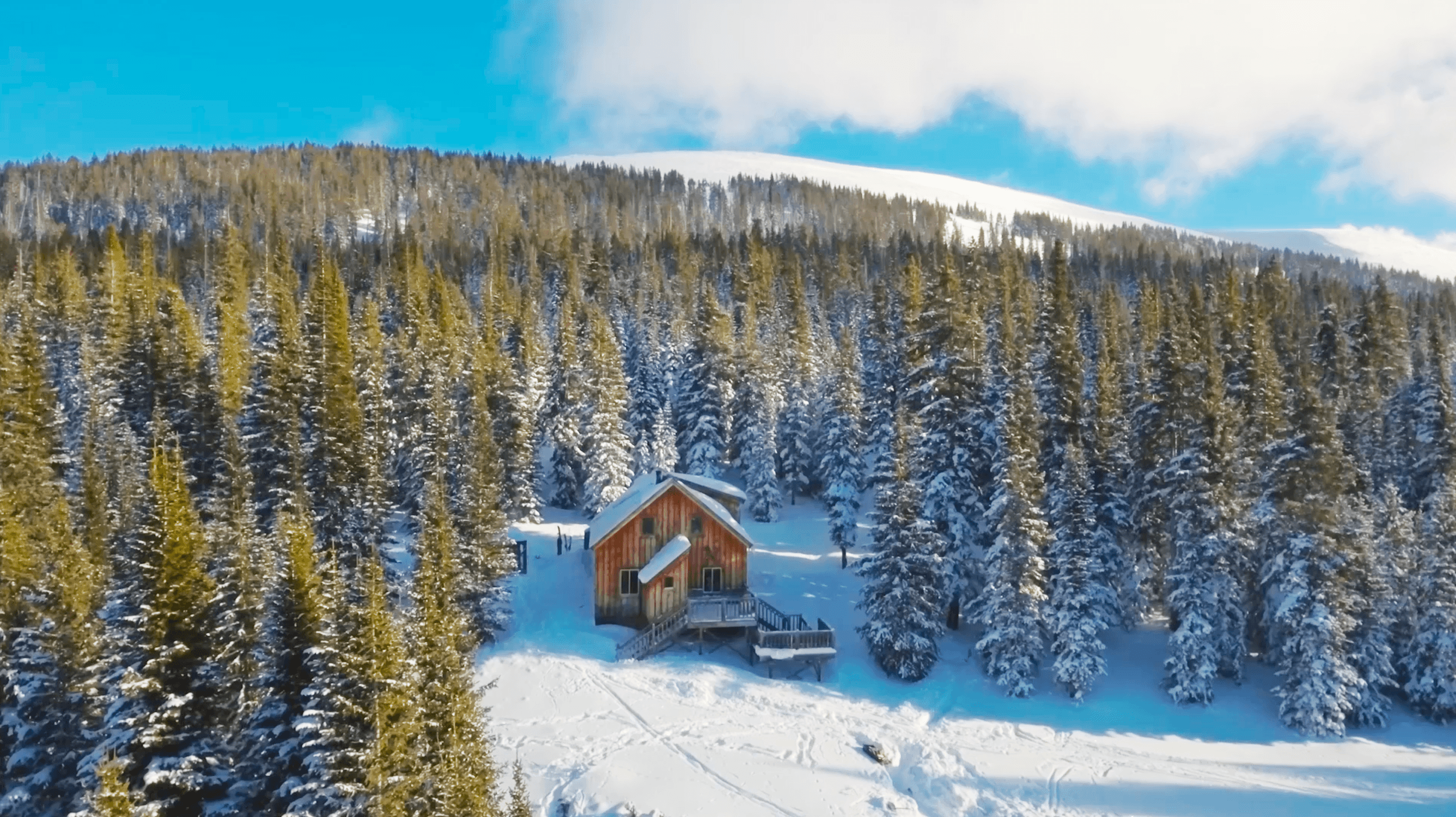 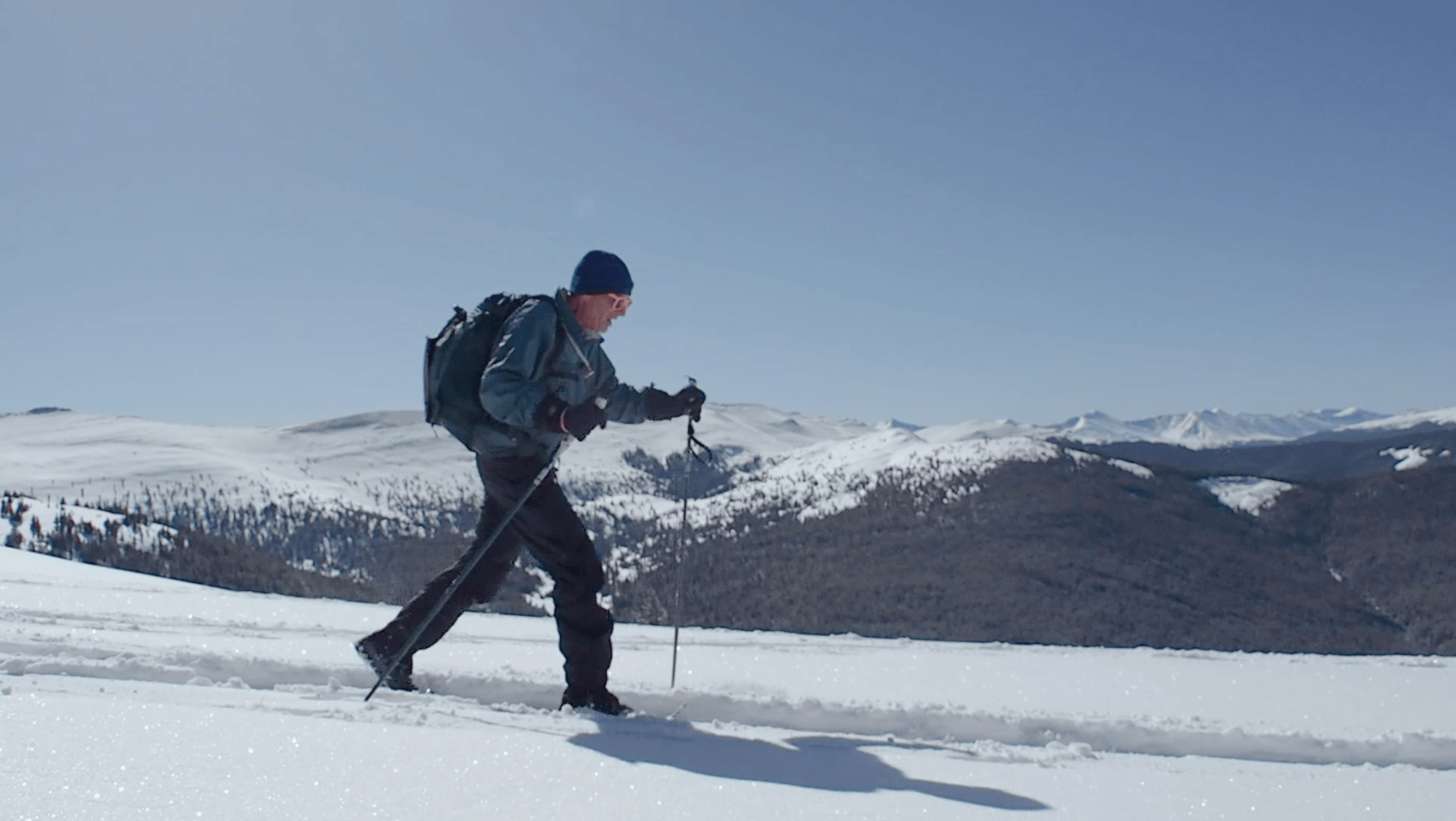 John Seipel, subject of the documentary "It's All Uphill From Here." Still by Hamilton Pevec.

Shawn Gallus had an idea. He thought, let’s put together a backcountry ski trip with the builder of several of the huts in the 10th Mountain Division Hut Association system. And then film it!

He and his friend Nick Cherney had purchased Polar Star Inn, a private backcountry hut on the western slope of New York Mountain, from John Seipel. Seipel built the hut in 1987 and had operated it for nearly 30 years. Gallus was one of its caretakers for about half that time.

Gallus and Seipel became friends and, over the years, Seipel had regaled him with stories of backcountry skiing and other outdoor adventures. Eventually, Seipel acknowledged that between 1988 and 1990 he built five of the cabins now in the Hut Association group. He was quick to point out, however, that he was the contractor and received a lot of help. Still, “I put a lot of nails [in Polar Star].”

After finishing the Polar Star, Seipel got in contact with Rob Burnett at the Hut Association, who, according to Seipel, was the “brainchild of the 10th Mountain [hut] system.” He explained, “I knew of sites [where huts could be built], and I was a contractor.”

Polar Star was built in one summer, and Seipel proceeded to construct four more huts in two seasons: Fowler/Hilliard and Jackal huts in 1988 and 10th Mountain Division and Uncle Bud’s huts in 1989. Skinner Hut was built in 1990. Cherney found the speed of construction “amazing,” but also pointed out that Seipel created much of the “feel of the 10th Mountain hut” in the details, like “the correct angle of the benches” so common in the hut system.

Seipel was helped considerably by the use of helicopters to fly in materials. He admits that in 1988, “I had a devil of a time” because so many helicopters in the west had been requisitioned to fight wildfires in Yellowstone National Park that summer. He was also proud to point out that the U.S. Army supplied helicopter transport for construction of the 10th Mountain Division Hut.

Over many years of the conversation, Seipel revealed to Gallus that he had not been back to most of the huts since they had been built. Gallus then proposed that they make a ski trip to all of them, which, in addition to him and Seipel, would include other people who had been caretakers at Polar Star and Cherney.

According to Gallus, “It was probably over the course of about five or so years of me asking him and adding people to the trip, like his daughter Cassie and the other caretakers, to get him to agree to doing it.” Eventually, a group of nine was assembled for the trek, which also included Seipel’s stepdaughter and a cameraman.

The trip was planned for eight days and seven nights, with one night at each hut (two of them, Vance’s Cabin and Betty Bear Hut, were not built by Seipel). Gallus and Cherney (via Polar Star) provided the funds for the trip and filming, but they both acknowledged the major contribution of the Hut Association, which donated the use of the huts and cleared the way for a continuous trip by such a large party. “They made the trip possible,” noted Cherney.

All that was needed was someone behind the camera.

Enter local filmmaker Hamilton Pevec, who had been recommended to Gallus and Cherney by mutual acquaintances. “I love the backcountry, but compared to other people in the valley, I’m pretty low-level,” Pevec observed. Still, he was up to the challenge and adventure.

The trek finally stepped off in April 2019, and it quickly faced its first and only serious challenge: people got separated, a snow squall blew up and, as Seipel put it, “Things got dangerous in a hurry.” Pevec added that they almost lost two people. However, everyone made it to the first hut (Fowler/Hilliard).

Another challenge that Seipel points out was that planning failed to take into account the degree of “vertical profile” on the trip — how much elevation they were going to encounter. Nonetheless, from the second day on, they had great weather, and, as Seipel noted, “Everybody got on board.” The strong camaraderie in the group is evident in the trailer for the film (watch it at bit.ly/10thhuttrailer).

In the end, only six skiers made it to the last hut (Betty Bear). Those involved, however, declined to tell who those individuals were, opting to let the film tell that story.

Pevec, a native of Carbondale, has been making films for some two decades. His most recent project, a commercial for Carbondale-based FastG8 online marketing company, was shown during this spring’s 5Point Earth Day Pop-Up Show.

In describing the film, “It’s All Uphill from Here: The John Seipel Story,” Pevec said that his objective was to strike a “balance between a historical documentary and an adventure film.” He wanted to create “a story about local people making big contributions to outdoor lifestyle, local people producing an adventure documentary.” As he got into the process, though, he realized that the film should also be a story of “people learning their own limitations” as they face challenges.

And he needed to do this within the constraints of a short “festival cut” of no more than 20 minutes. “The trick is that it is harder to make [a film] shorter. You have to get to the point sooner; every second, every word counts.” He did note, though, that a longer version will be made for “the producers [Gallus and Cherney] as a posterity piece.”

Pevec is now editing the large amount of footage he shot. Funding to complete the film has been generously provided by Bristlecone Mountain Sports and FastG8, “But it’s just enough for post-production.” More is needed for distribution and marketing, and a private fundraising screening is planned at Bristlecone in Willits “sometime in late summer.” He was quick to note, “This is not a world premiere. We would love to be invited to 5Point!”