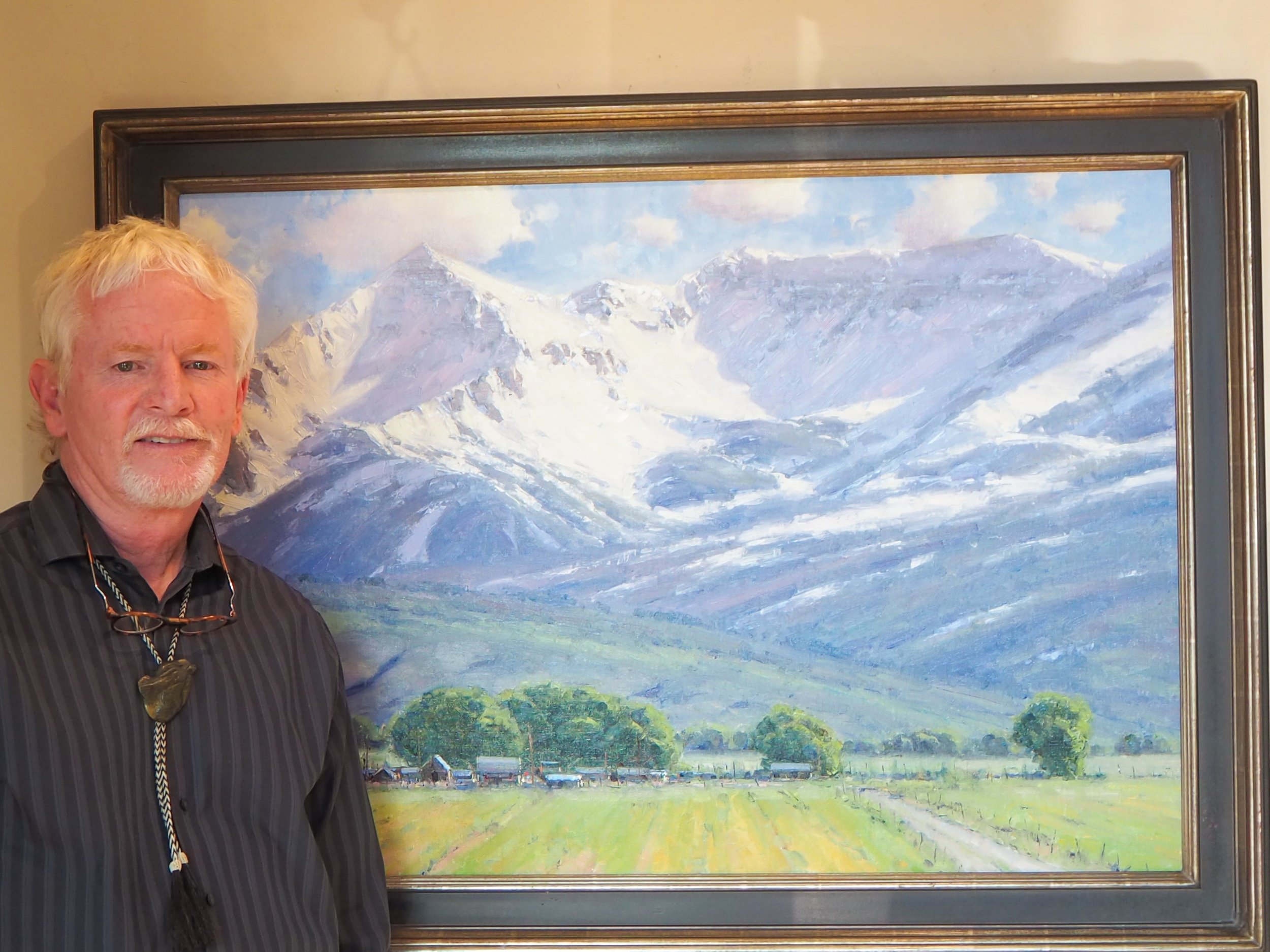 Artist Dan Young and his paintings. Photo by Raleigh Burleigh.

“Dan came with the gallery,” Ann Korologos teases, referring to accomplished local painter Dan Young. Long before purchasing The Basalt Gallery from its retiring owners in 2007, Korologos counted several of Young’s paintings among her personal collection. Some years earlier, she introduced 20 of Young’s paintings to Europe, with her husband Tom serving as U.S. Ambassador to Belgium.

On Saturday, July 10, Basalt’s mainstay gallery held its first in-person reception in over a year, with Young in the spotlight. “It’s a wonderful feeling to reopen,” Korologos told The Sopris Sun, adding, “Dan is a part of the gallery’s heritage.”

Young grew up in Glenwood Springs, left after high school, and returned in 1989. Motivated to be a professional artist, Young got started with a career as a commercial illustrator for a department store. He recalls the great practice of depicting objects for sale in a realistic style that had to match the work of other artists hired for the project.

Soon, Young began wandering outdoors with oil paints and a collapsible easel. It was plein air painting before the trend resurged as a popular thing to do. “For me it’s about gathering information,” Young said of his process. With on-location studies and photographs to reference, Young then renders a full piece at his studio. He has been a professional painter for over 30 years and Western Colorado remains his favorite place to work.

“When I first started painting, I went out looking for the obvious pretty picture,” he explained. “I’m now trying to slow down and paint those scenes that are not so obvious.” Gazing around at his work on the walls, several pieces jump out as examples: like a curving fence, obstructed by thick dashes of shadow in a muddy field with no horizon (the piece is called “Late Winter Willows”).

As we spoke, a Texas couple approached to inform Young they had just purchased three of his paintings, including one of the largest on display (“Spring Drift on the Fork”). Young explained that one of the smaller pieces, a snowy ridge with delicate “feathery” trees, was among his favorite on-location studies (“The Shadow Side”). Asked how it feels to let go of a favorite, he responded that it’s a special feeling to have work gracing homes throughout the world.

“The reality of it is, I have to be able to sell paintings to make a living, so it’s real easy to get dictated by the market.” Still, Young explores a style that balances between realistic and abstract. “I want to give you enough information in my painting that you know what it is without telling you everything.” The apparent simplicity of a thick layer of soft orange vibrating against a purple hue looks almost like a photograph from a short distance away (“Color Dance”).

Young’s work has hung at The Basalt Gallery since its inception. He calls it his “home gallery.” The solo exhibition, complemented by other works by western artists, will be on display through July 20. The gallery is open Monday through Friday (10 a.m. to 6 p.m.), Saturday (10 a.m. to 7 p.m.) and Sunday (11 a.m. to 3 p.m.) and also by appointment.

Throughout the pandemic, despite public health precautions, the Ann Korologos Gallery has seen a growth in clientele. Korologos attributes this to the spiritual experience of art and its ability to transport a person. She calls her personal collection, her “stable friends,” always present and often offering something new to discover.