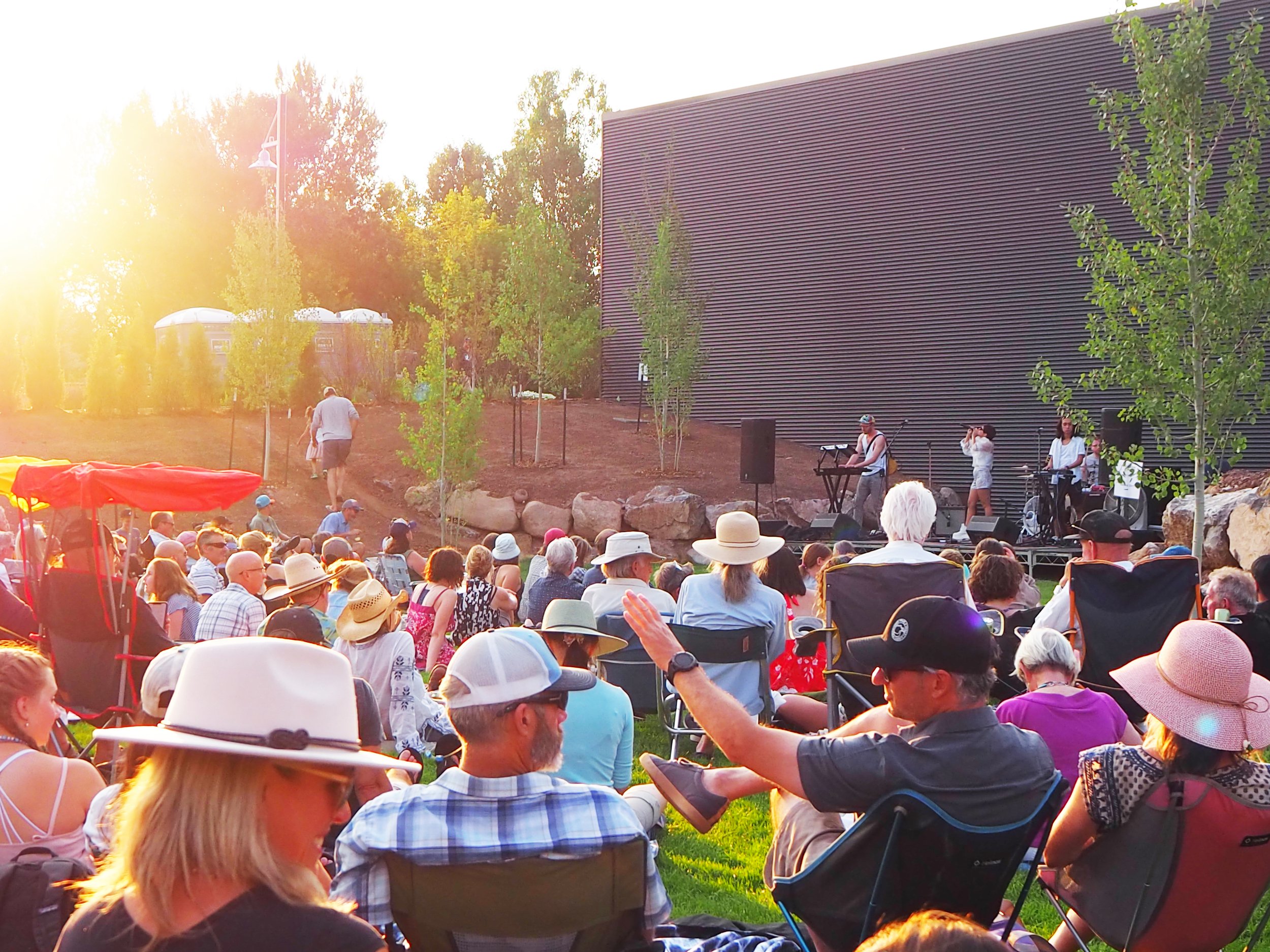 Denver-based Neoma delivered a lively show, packed with bilingual ballads, for TACAW's kick-off to a free summer concert series that will continue every Saturday through August outside The Contemporary. Photo by Raleigh Burleigh.

The Arts Campus at Willits (TACAW) is returning live music to the people. The first of many live outdoor shows at the nonprofit venue took place on July 10 with Ecuador/Denver-based indie artist Neoma performing a lively set to a full audience. The concert was a beautiful peek into what TACAW has to offer. The young artist brought a simultaneously lively and laid-back performance to the outdoor amphitheater. Attendees started off by kicking back and enjoying each song, sung in Spanish and English. Soon, the crowd moved closer to the stage to dance along with Neoma. By the end, the outdoor concert space was bustling with people of all ages forming conga lines, couples embracing, people on lawn chairs and blankets swaying their arms and some folks even enthusiastically dancing alone.

Experiencing live performances post-COVID restrictions is a wonderful thing, and what better way than while discovering new artists at a free event. Once fully open again, TACAW plans to host four to five events per week, mostly ticketed.

The Contemporary will be the first net-zero performing arts center in the country, offering a dynamic and spacious environment for events, education programs, and other initiatives, including the free summer concert series made possible with support from the Town of Basalt. “It’s got that new building smell,” Executive Director Ryan Honey stated during a tour. The campus boasts an education facility, luscious outdoor gathering space, large indoor event space, a 14-foot video wall, a full kitchen (all-electric) and many moveable tables and chairs to customize the layout according to each event.

“There is no gas line that comes into the building, it’s all powered by panels on the roof, with batteries stored in the basement. It felt like the right thing to do,” Honey told The Sopris Sun. As a public space that intends to host artists who care deeply about climate change, there was no question about making the facility as green as possible. “Ten years from now,” Honey mused, “[an artist] could travel across the country in electric vehicles and go to other net-zero performing art centers and have a carbon-free tour.”  The proximity of talented artists in Denver plants a promising seed for that dream. “We could be used as a model for [art venues] as other net-zero art centers come up.”

In 2020, at the onset of the pandemic, TACAW and nearly every arts program in the world were shut down. Honey mentioned that during the lockdown and restrictions, the staff and board collectively wondered, “How do you bring arts and culture to the people?”

With creative collaborations, TACAW was able to deliver what Honey described as “at-home curated content” and large-scale, drive-in screenings of concerts. Another event that continues in 2021 is a socially-distanced street performance activation known as Wednesday Night Live; a collective project between TACAW, the Town of Basalt and the chamber of commerce.

Kendall Smith, who was hired as program director in early 2020, is happy to curate in-person performances again. Smith came from Denver, where he formerly organized the Underground Music Showcase and managed partnerships and events for Colorado Public Radio. “I hope that the community embraces new things, artists and comes to be aware of the vast amount of talent that this program has to offer,” Smith said.

Honey and Smith both stated that they are still fundraising for The Contemporary building. So far, TACAW has raised over $4.5 million toward its $7 million goal. Honey said, “We have had a great, broad-base of community support and we want to continue to enjoy that. We have an ambitious goal to fully pay off the building before the grand opening [on September 25 and 26].”

*All shows are free and begin at 7 p.m. RSVP is required at tacaw.org