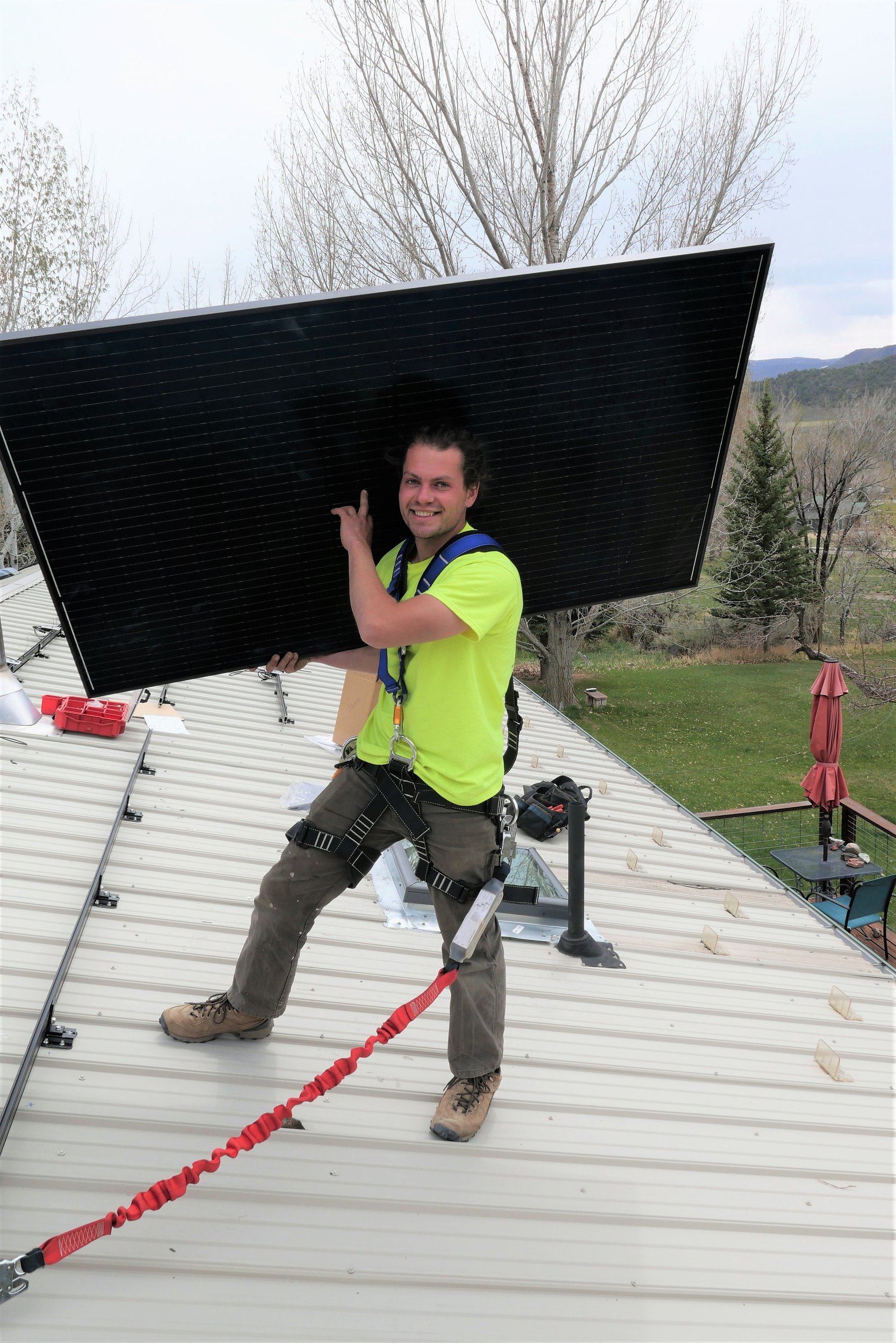 An Active Energies installer works on a rooftop installation in New Castle as part of the Solarize Garfield campaign. Photo courtesy of Dave Reed/CLEER.

Solarize Garfield County (Solarize), an initiative of Garfield Clean Energy (GCE) first reported in the Sun’s March 17 issue, has been a huge success, surpassing all expectations. The initiative sought to increase the number of residences in the county with rooftop solar power generation through incentives like below-market installation costs and an array of rebates in addition to the attraction of environmental friendliness and reducing one’s carbon footprint.

Zuleika Pevec, the clean energy program coordinator for Clean Energy Economy for the Region (CLEER; the Carbondale-based nonprofit that manages GCE and was instrumental in implementing the initiative), said, “We feel that for the first year of the [Solarize] program, it blew our expectations out of the water!” Between March 1 and June 4, more than 400 homeowners expressed interest in the program, and some 300 had an on-site feasibility evaluation by Avon-based Active Energies Solar, the firm selected to install the solar-power units.

Sign-up for the program (initial interest, evaluation and signing a contract with Active Energies) originally was intended to end on June 4. Because of the greater than anticipated interest, the deadline for inking a contract was extended by a month. By early July, 110 homeowners had committed to contracts.

The response of Garfield County residents “has been amazing!” observed Rich Clubine, vice president of Active Energies. He went on, “CLEER was hoping for 250 to 300 kilowatts [of total installed solar power], I was thinking of about 500 kilowatts or so, but we ended up with contracts for some 855 kilowatts. We blew out all [of the predictions]!” And they nearly achieved their “pie-in-the sky goal” of one megawatt. This sentiment was echoed by Carbondale trustee and GCE board member Ben Bohmfalk, “We thought the Solarize strategy could help boost solar energy development in the county, and as it turned out – it tapped into even more demand than we imagined. We’re really pleased with the results.”

Clubine said that the first installation was done at the beginning of April, about a month after the contract was signed (the typical length of time needed for the permitting process). He currently has three crews working on the installation of the solar panels themselves and two crews of electricians doing the hookups. “We are installing four to five systems per week, depending on weather and I-70 [closures].” By press time, Active Energies had completed some one-third of the installations, with a goal of finishing all by the end of October. He noted, though, “We install year-round.”

The largest group of participants in the program were Xcel Energy customers, with nearly 50 households. They were roughly matched by Holy Cross Energy and Glenwood Springs Electric customers, each with about the same number of households. In addition, CLEER’s Pevec noted that 40 participants were from Carbondale.

The 110 contracts totaled $2.8 million in all, according to a July 19 CLEER press release. Of those households, Clubine pointed out that 19 opted to also install battery backup units, amounting to 372 kilowatts of storage capacity. The press release noted that this represented $310,000 of total sales.

Holy Cross and Glenwood Springs Electric customers will each receive rebates for their installations. Although Xcel did not offer rebates, Garfield County created a rebate program that was increased from an initial 18 customers to 45; nearly all who participated received one. In addition, Active Energies provided a $375 rebate for each participant. When combined, rebates from the four sources totaled some $270,000. In addition, all of the homeowners participating in the program will be eligible for up to a 26% tax credit on their 2021 federal return.

The 2021 Solarize campaign has been the most successful one in the state to date. Asked why this might be, Clubine opined, “There is a lot of pent-up demand for solar … other companies are also booked.” Active Energies was also the installer for a similar initiative in Summit County in 2019-2020, but, as Clubine pointed out, “We did [in Garfield County] in one year what took two years [in Summit].” GCE board member and New Castle Councilor Bruce Leland noted, “This is really a shining example of what GCE does and the value it contributes to our county.”

Pevec indicated that this year’s solar campaign might not be the only initiative pursued by GCE. “We are hoping to improve the whole program – see where it could be better.”

Maisa Metcalf, CLEER’s buildings program director added, “Based on the successful results of the program, we would love to do it again next year with a special focus on battery storage and additional incentives for low to medium income households.”