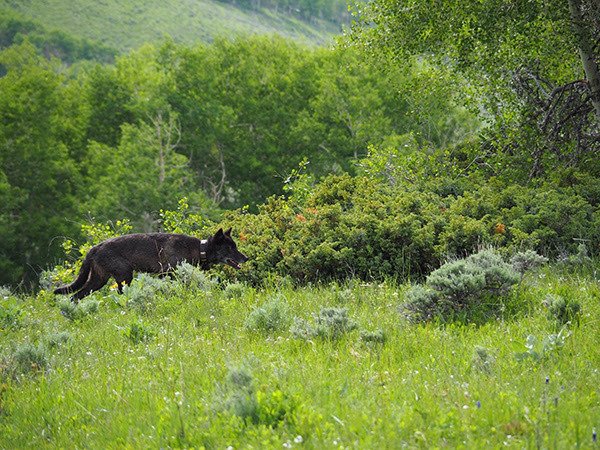 Wolves are predators and so are humans. Therefore, respecting each other’s space, experts say, is key to avoiding conflict between the two. According to the International Wolf Center’s website (wolf.org), “The injuries that have occurred [to humans] were caused by a few wolves that became fearless of humans due to habituation. Nonetheless, like bears and cougars, wolves are instinctive predators that should be kept wild and respected.”

Gray wolves were officially protected in 1974 following the Endangered Species Act of 1973. Leading up to that, and since European occupation of the United States, wolves were killed at will by humans competing with the animal for resources; i.e. prey (think beaver pelts).

As of January 2021, the federal government removed gray wolves from the endangered species list and their management was left to the states’ discretion. In Colorado, this came alongside the passing of the November 2020 ballot initiative to reintroduce wolves to the state. According to Colorado Parks and Wildlife (CPW), “This marks the first time voters have decided to reintroduce wolves in the U.S.”

However, gray wolves have already started making their way into Colorado on their own. For instance, a mother and six pups from a pack on the Snake River were recently spotted in Colorado.

Since the initiative passed, CPW was directed by the Parks and Wildlife Commission to collect public input regarding the reintroduction and management processes. The commission is a citizen board selected by the governor which includes three sportspersons, three agricultural producers, three recreationalists and two “at-large” members.

Keystone Policy Center (KPC) was contracted to collect public opinion. KPC is “an independent, nonprofit, non-advocacy organization that brings together diverse perspectives to inform decisions and to help leaders reach common higher ground,” as defined by the organization’s Senior Policy Director Julie Shapiro. The non-advocacy group was also tasked with forming the Technical Working Group and Stakeholder Advisory Group as part of the planning process.

CPW Public Information Officer Bridget Kochel explained further that, “CPW and KPC launched wolfengagementco.org — a public engagement website where Coloradans are able to provide comments via a detailed online comment form throughout July and August 2021, as well as general comments about the process at any time during the planning process.”

If online forums aren’t your cup of tea, people are also invited to various open houses planned throughout the state hosted by CPW and KPC. An open house in Glenwood Springs occurred on July 13 and more are planned (including one in Eagle on Aug. 27), nearly every week, through the month of August — refer to wolfengagementco.org for dates and locations.

Once KPC is finished collecting insight, “Keystone will be reviewing, analyzing and synthesizing comments … and will produce a report for CPW and the [Parks and Wildlife] Commission,” said Shapiro. Then, the policy process will commence and wolves, in accordance with the 2020 initiative, are to be “restored and managed” within Colorado no later than Dec. 31, 2023.

According to Kochel, they do not know where the wolves being introduced will come from. “The potential source populations of introduced wolves is not yet known,” she said, “this information will be included in the overall introduction and management plan currently being developed.”

Compensation for livestock losses due to wolf activity will come out of CPW’s wildlife cash fund. Still, at the July 13 open house, local ranchers expressed a need to handle a problem predator in some cases, even if that’s an incoming gray wolf.

“It’s going to be pretty tricky to manage, I think,” said local rancher Bill Fales, “because there is going to be conflict.” He continued, “We know people who run cattle where there are wolves; there is conflict and there are tools to minimize that conflict but you have to make sure those tools are available.”

One tool that should be available, according to Fales, is that a rancher or CPW should have the right to use lethal control against a wolf that is attacking livestock. “I think that message needs to get out so when you do shoot a bear or a wolf, or CPW does, they don’t get hung for doing that.”

Marj Perry, Fales’ wife, chimed in, “One of the questions they were asking online was, ‘How can they make wolf restoration successful?’ I would say, by making it work for ranchers and the public. To do that, people have to be willing to understand where a rancher is coming from and that’s where lethal control as a tool, as needed, is a really essential thing to include.”