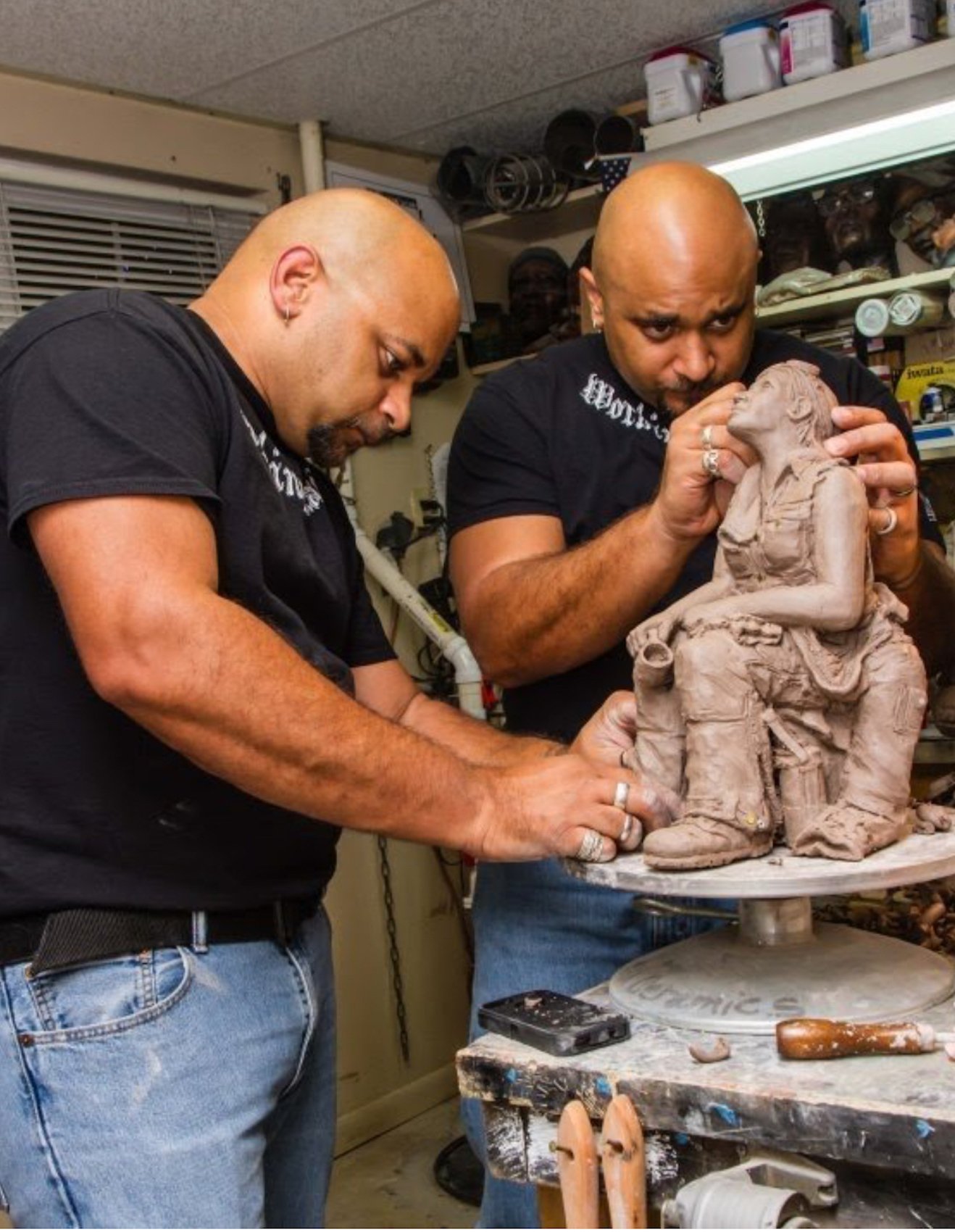 The Phelps twins, working on a ceramic figurine in the studio. Courtesy photo.

Kyle and Kelly Phelps have been figuratively connected at the hip since birth. “How?” you ask. Well, they’re twins, devoted brothers and share a common life pursuit of spreading socio-economic awareness through art. Their exhibit, “Race, Class, & the Blue Collar,” has been on display at the Carbondale Clay Center (CCC) since July and it will conclude with a reception on Aug. 28.

“We’ve collaborated since day one,” said Kelly. “Pretty much since we were in elementary school we’ve just been working hand in hand — kind of like one person who happens to be in two different bodies.”

The identical twins are the youngest of eight siblings and grew up in the town of New Castle, Indiana which they describe as a little factory community. “The company owned literally every aspect of the town — kind of like living at a miners camp,” Kelly explained. His brother Kyle added, “Art was never on the radar as kids and into high school. We were kind of expected to either go to the [military] service or work in a factory.” That being said, the two were creating pretty much as far back as they can remember. After seventh grade, “we really started taking more and more art based classes,” said Kyle.

Their parents worked at Firestone, the tire company, and they both passed away due complications arising from exposure to asbestos while working at the factory.

At their father’s insistence, the duo attended college and were two of the first in their family to do so. They both obtained their bachelors’ degrees in fine arts from Ball State University. “But, like a lot of people, after your four year experience you’re not quite sure what to do with your degree so you end up back working in the plants alongside your father,” said Kelly. These two were no exception.

During their undergraduate years, and for the year leading up to graduate school, the twins worked at MidWest Metals where they picked up some welding experience. Later, they worked for the BorgWarner Gear factory which makes car transmissions.

“We look at our art skills as more than just art skills because we learned foundry skills, mold making skills, casting skills, welding skills all from working inside of the plant,” explained Kelly. “A lot of those workers had various skills that mimic what we were learning formally in the art sector. So, we look at factory workers as craftsmen just like fine arts craftsmen are.”

The two got a taste of ceramics in college and were inspired to go on to graduate school after meeting Bobby Scroggins, a ceramics professor at the University of Kentucky. They described how Scroggins was the first African American professor they’d met making a living doing what they likewise loved to do. Today, they are full-time professors themselves at two different Catholic universities in Ohio. They live only five minutes apart and continue to share a studio.

While they are known for ceramics, they don’t like to classify themselves as ceramicists. They incorporate many other artistic elements, ranging from welding to drawing, in their work as well.

The Phelps brothers have been to nearly all 50 states for workshops, lectures, exhibitions and often for inspiration for a piece. The purpose of their work is to shed light on the blue collar workers in the United States and they say the job is far from over. “It’s a life-long commitment; we’ve been digging at this for 20 plus years and there’s so much more to talk about,” Kelly stated. Next, they hope to venture into the world of blue collar agriculture.

They like to merge remnants from factories, such as tools or gears, with their art to honor the origins of a concept. “Instead of creating these arbitrary ceramic elements, we like to give a sense of place and time by using actual corrugated metal, gears and other factory remnants. That kind of grounds the work for us,” explained Kyle.

When it comes to race, they directly confront issues facing African Americans and people of color. However, as Kelly puts it, “The working class is inclusive, because the struggle affects everyone.”

His brother Kyle added, “We just want to reach a broader audience because I think our subject matter transcends just us. When I’m talking about us, [I’m talking about African American people] but we’re also talking about the working poor, the person who lives down the street — it’s not just about us, it’s an everybody issue.”

“We [blue collar workers] are the makers of everything,” said Kelly, “yet we have the least representation. I would think the least amount of respect as far as occupations and the least job security.”

Their exhibit is at the CCC through Aug. 28 with a closing reception that the twins will attend on that final day from 6 p.m. to 8 p.m. Kyle and Kelly will also lead a workshop for artists interested in creating ceramic figurative narratives on Aug. 28 and Aug. 29. For more information, visit carbondaleclay.org