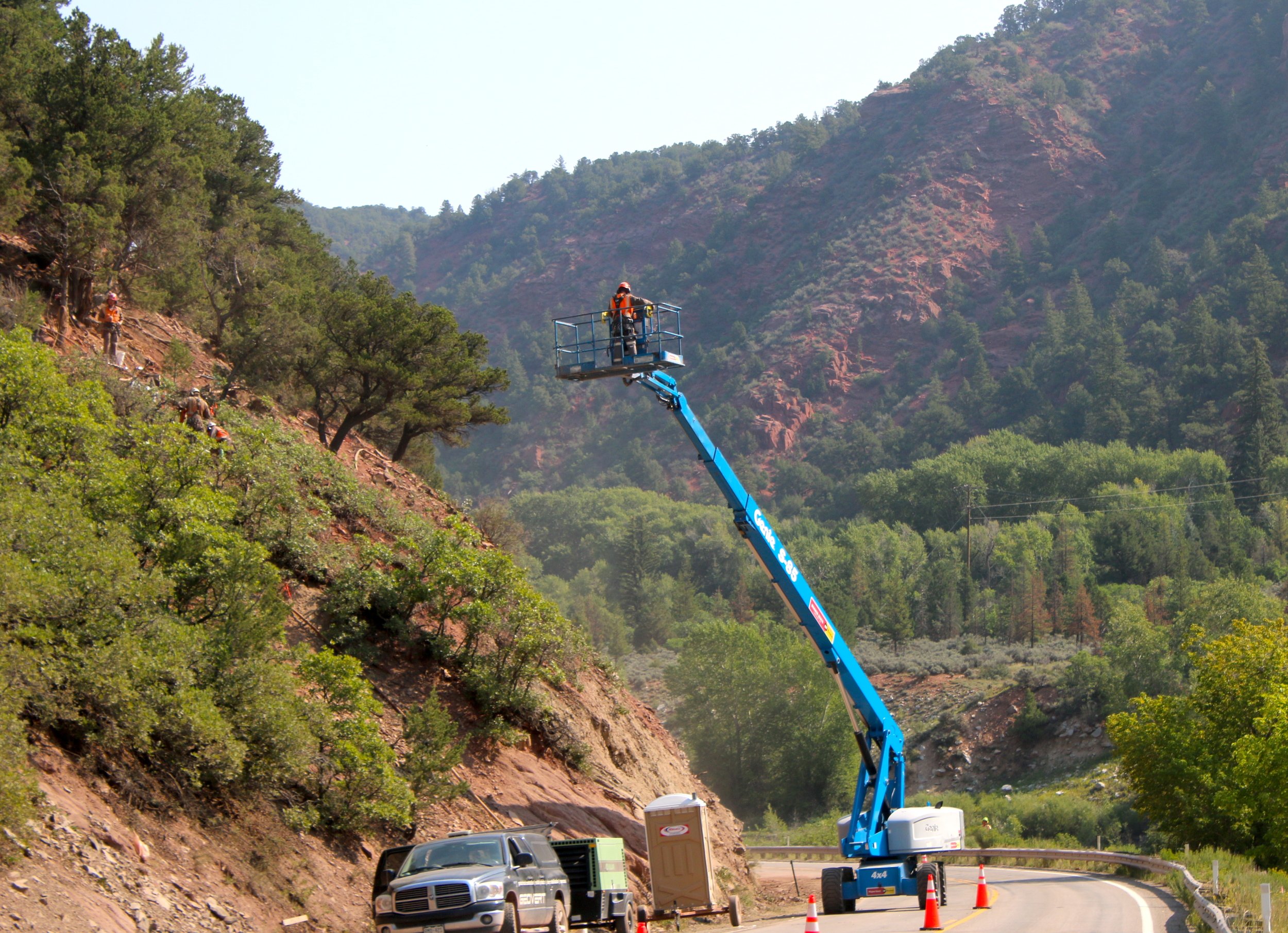 High in the sky and back to the hillside, Geovert and CDOT are seen here working on rockfall mitigation on Highway 133. Photo by James Steindler.

With pervasive road work and more cars on the road, comes more idling and waiting for traffic to move, with the vehicle’s AC blowing (or windows down).

Commuting is a daily necessity on the Western Slope for many, if not most, of the people here. Whether heading back from work through the Crystal Valley on Highway 133 or, like most folks around here, through the canyons west on I-70 to New Castle or east to Gypsum, some nights commuters are asking themselves if they’ll be able to make it home at all.

When recent mudslides came down on Highway 133, folks were pulled off on the side of the road waiting it out as long as they could, hoping that the Colorado Department of Transportation (CDOT) would come to the rescue by clearing a path. Some people parked and left their cars before wading through the thick red muck and walking the rest of their way home. Most turned around and found shelter for the night elsewhere.

To help prevent similar catastrophes, CDOT contracted Geovert to conduct rockfall mitigation on Highway 133 beginning in April and the work is expected to continue through October. The effort comes with traffic delays for commuters. “Rockfall mitigation is one of the best ways to maintain safety on Colorado’s rural highways,” said CDOT Executive Director Shoshana Lew.

The Glenwood Springs Chamber of Commerce put The Sopris Sun in touch with a few business representatives whose colleagues’ commutes were drastically affected by the I-70 closure.

Nancy Heard, general manager of the Glenwood Caverns Adventure Park, said they had two employees commuting from Gypsum and that the detour over Cottonwood Pass was “absolutely wearing them out.” Management went so far as to offer employees lodging accommodations so they wouldn’t have to make the extra long drive.

Valley View Hospital (VVH) also has a handful of medical staff who live on the other side of Glenwood Canyon. “Imagine being a nurse that’s been working on acute care for their shift and then adding that amount of time to their commute,” said VVH Chief Community Relations Officer Stacey Gavrell.

But aid came from the sky. “In the world of pilots, there is what’s called an aircraft owner and pilots association and they assign an individual, or a volunteer, to kind of help support an airport. So I’m that volunteer for the Glenwood Springs Airport,” said Eric Strautman. He also happens to be an optometrist at 20/20 EyeCare.

Strautman coordinated with fellow pilots who jumped at the opportunity to volunteer and transport medical personnel commuting from east of Glenwood Canyon to VVH. He organized at least three different occasions to fly VVH medical staff to the Glenwood Springs Municipal Airport and said “[there] are about 15 other pilots who additionally volunteered to make their planes available if needed.” 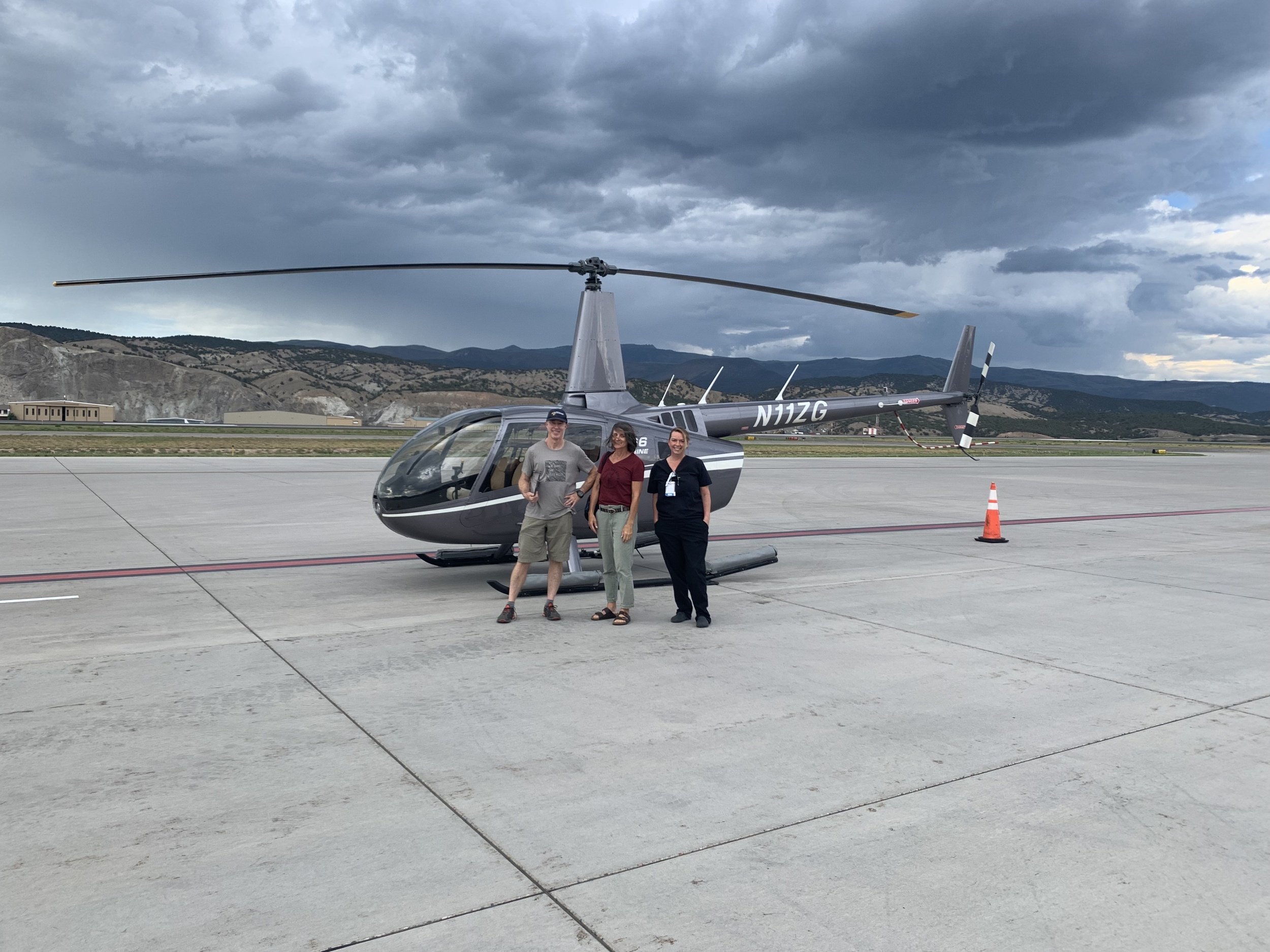 Gavrell mentioned I-70 being closed may affect patients getting to the hospital for specialized care, like VVH’s cardiovascular cath lab which is unique to the region. She also added that the closure raised concerns about the medical supply chain. “We’ve got vital medical supplies that have to get to the hospital,” she explained, “like oxygen and supplies for surgeries.”

CDOT will likely continue to enact temporary closures on I-70 when rain is in the forecast. After waiting for hours or days for a section of road to open up, the 20 minute wait on Highway 133 for rockfall mitigation may not seem so bad, and rather necessary.