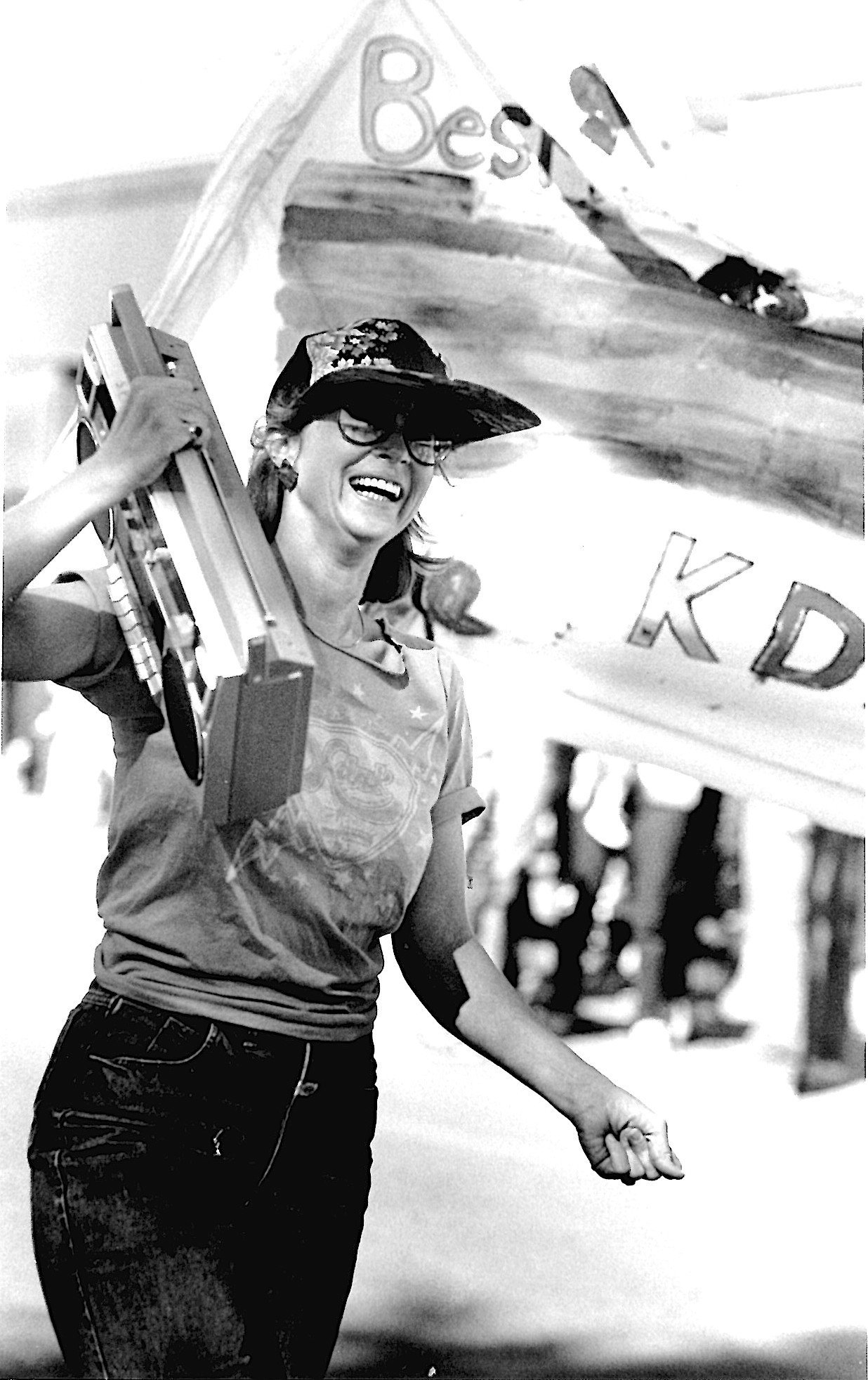 Ingrid Seidell walks the 1985 Potato Day parade on behalf of KDNK radio, which was only two years old at the time. Photo from Valley Journal archives.

Potato Day is the longest standing locals’ tradition in Carbondale. The event kicked off in 1909, and celebrated its 100-year anniversary in the same year that The Sopris Sun printed its first issue. On Oct. 2, the Town celebrates the 112th annual Potato Day.

The significance of the potato for this town is often lost on contemporary Carbondalians. Local potato pioneer Eugene Grubb even wrote the book on potatoes in 1912, titled — wait for it — “The Potato.” Aptly, Mr. Grubb sat on the first-ever Potato Day committee.

“The proof of the pudding is in the eating,” wrote Grubb. “It must be properly cooked and served, and thus the Carbondale potato will be found one of the delicacies of the world.”

In years past, Potato Day coincided with Roaring Fork High School’s homecoming and the respective football game. Each year, a potato king and queen were crowned, in addition to homecoming royalty.

Other contests did not survive the test of time. For instance, a 1913 Potato Day brochure, preserved by the Carbondale Historical Society, lists a “fat man’s race” as one of the many competitions with a grand prize box of cigars, a silk handkerchief for placing second and carton of cigarettes for third place.

It was not until 1971 that folks were charged (.50 cents) for the communal meal. A 1966 article in Glenwood Springs’ Reminder Record (a supplement to the Morning Reminder at the time) reports that there were about 4,000 people fed on Potato Day back then. This year, folks will be welcomed to feast on locally sourced beef and potatoes.

With the exception of a couple of years during the world wars, Potato Day has never been missed.

Up until 2018, the Zeta Epsilon and Xi Gamma Tau sororities took charge of putting the event together.

“As a collaborative,” began Potato Day committee member Jessi Rochel, “it was Carbondale Parks and Rec, Chamber of Commerce, the Historical Society, the library and,” yours truly, “The Sopris Sun,” that took over when the sororities decided to pass the baton. Then, KDNK joined the committee in 2019.

Rochel grew up in Carbondale after moving here as a kid in 1991. Her birthday is in the beginning of October. “I can remember, as a kid, having my birthday party and a sleep-over and we’d get up in the morning and go down for the parade.” She said that Potato Day holds “a lot of great childhood memories for me.”

While attending Roaring Fork High, Rochel took part in the class float for the parade. “My senior year, they painted me green and I was the Statue of Liberty,” she laughed.

As long as she can remember, there has been a theme for Potato Day. “I remember my freshman year of high school it was ‘the Flintstones,’” she said. “We built a paper-mache volcano that actually smoked.” This year’s theme, ‘Tuber Renaissance’ is meant to symbolize the Town’s rebirth, after a chaotic year-and-a-half.

That said, as folks who are paying attention to COVID-19 case are aware, the world isn’t out of the woods yet. Therefore, this year, organizers are taking the utmost precautions. “Each lunch item will be packaged separately and placed on its own table,” stated Sue Gray of the Potato Day committee. “Lunch bags will be provided for people to fill up with the prepackaged items. Tables (as well as vendor booths) will be spaced wide apart throughout the park.” She added that, “Masks and social distancing are encouraged.”