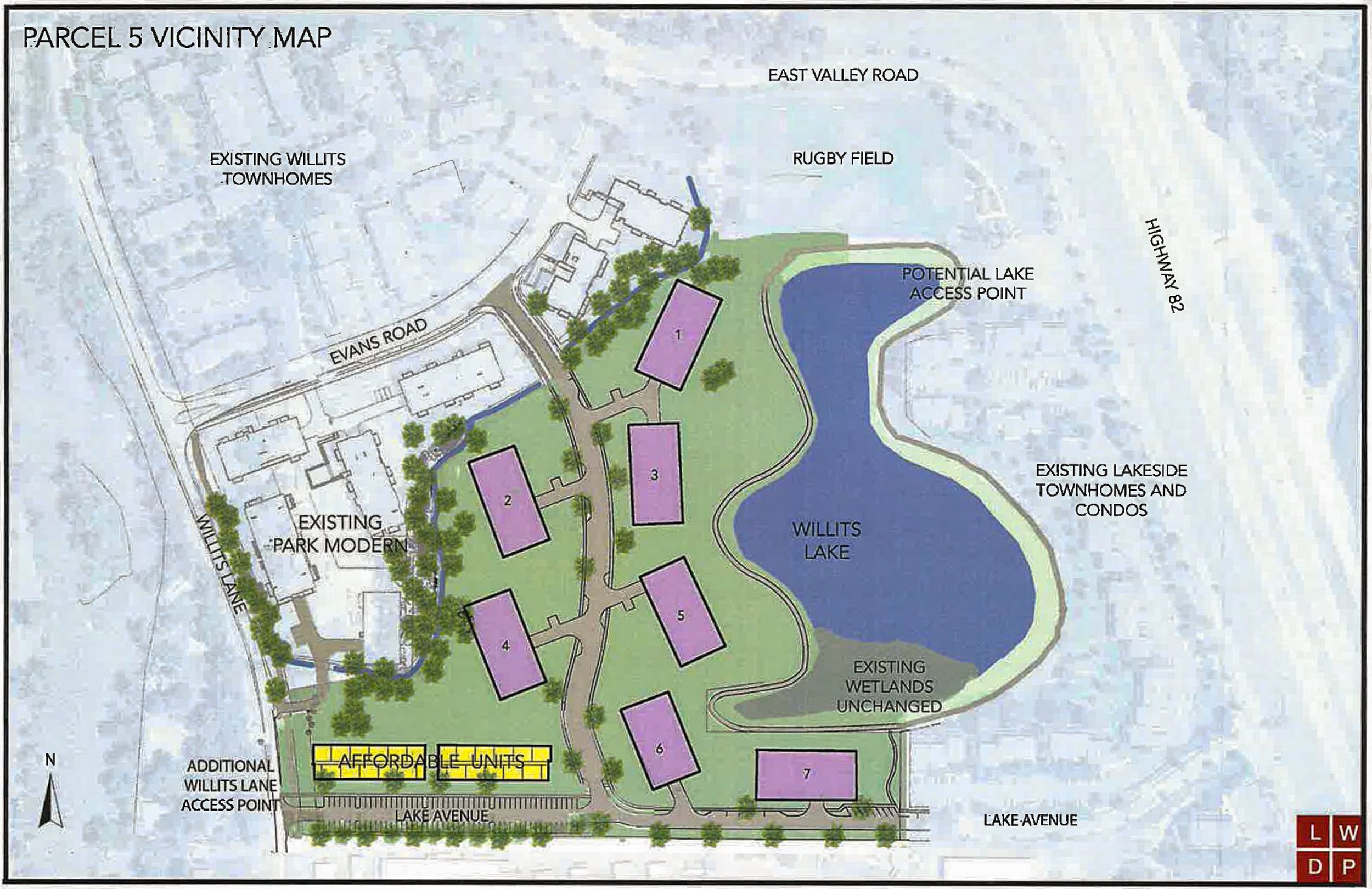 The other major presentation of the night addressed BCC Basalt LLC’s revised concept for a rezoning to demolish the former Clark’s Market building at the entrance to downtown Basalt, to build 66 rent-capped apartments and a 9,000-square-foot grocery store.

While citizens still spoke against the revised scale and height of the BCC Basalt plan, the Possumco application was the more contentious and time-consuming business of the night. Mayor Bill Kane reminded the audience that the Sopris Meadows Parcel 5 project was at the very beginning of the planning and zoning process, and that it was “a very initial, impressionistic look at the property.”

It wasn’t the proposed 155 homes and 350 parking spots that prompted eight neighbors from Park Modern and Willits Townhomes to condemn Lipkin’s plan. Rather, it was the developer’s stated desire to provide access to Parcel 5’s residences via Evans Road, in addition to Willits Lane and East Valley Road. Jorges Fuentes told the Town Council that “there is zero justification for paving on one of the last unmolested green spaces” in Willits. He submitted a petition signed by 109 of his neighbors who agreed.

“The green space that’s there is well worth saving,” said Mary Foto, who lives on Evans Road. She cited 2021 updates to the Town of Basalt Strategic Framework, which calls for enhancing the Town’s parks and open spaces, and pursuing land use strategies that protect the natural environment. Town Councilor Bill Infante, who voted against granting Possumco’s sketch plan approval at this stage, called giving access to Parcel 5 via Evans Road “an asphalt maximization plan.”

Others opposed the use of Evans Road for safety reasons. Jay Israel, who has lived in Willits since 1998, called the Evans Road proposal “totally inappropriate and dangerous to children and dog walkers.” Jill Kosdrosky, treasurer of the Willits Townhomes, raised similar worries, adding that bicyclists would face the hazard of another intersection. Judy Nespeca of Willits Townhomes, suggested a raised bike trail be built over the road to avoid the traffic.

Lipkin, on the other hand, was quite certain that the Evans access to the new development was necessary. “The road was platted there 20-plus years ago,” he said. “We have planned around that road. We put in trails and left 46 acres of open space. I simply don’t buy that it will be a highly-trafficked, dangerous road. I don’t share their fears.” Lipkin said he wanted to “stick to the elegance of our plan” because the Evans Road access would give everyone in the new development, including those who lived in affordable housing, a shorter, more direct route. “Nobody is looking at the rights of future residents,” he said. “These people are not interested in allowing other people to enjoy what they have.”

Town Councilor Elyse Hottel agreed, saying that she thought it was “slightly biased and inequitable” to the affordable housing portion of the development to have its future residents have to drive farther.

Town Council expressed appreciation of Possumco’s inclusion of affordable housing, and requested that 22 of these units be completed first. Councilor Gary Tennenbaum asked Lipkin why apartments were planned as rentals rather than as properties to be purchased.  Lipkin explained that in the past, recessions made it difficult for lower-income owners to keep up with expenses, and many lost their homes. He said that providing rental properties meant that tenants didn’t have to assume all the responsibility for maintenance, or keeping up with monthly homeowners association payments. “Banks have trouble financing projects because of a lack of maintenance and failure to pay HOA dues.” Having an inventory of affordable rental properties, Lipkin continued, “is a kinder solution.”

Earlier in the evening, councilors easily agreed on a few recreational matters. The meeting began with the granting of a Special Event Activity Permit for the October 16 Aspen Valley Marathon, half marathon, and 5k run that will end at Lions Park.

Councilors asked how business was. Roots Rx owner Robert Holmes and Goodpeople Dispensary owner Justin Streeb, whose medical marijuana license was also renewed, shared similar experiences. Sales went up during the pandemic shutdown. “We had an in-house joke that we could tell when people received a check from the government,” said Holmes. “Then when people went back to work and they lacked federal funds, sales went down.”