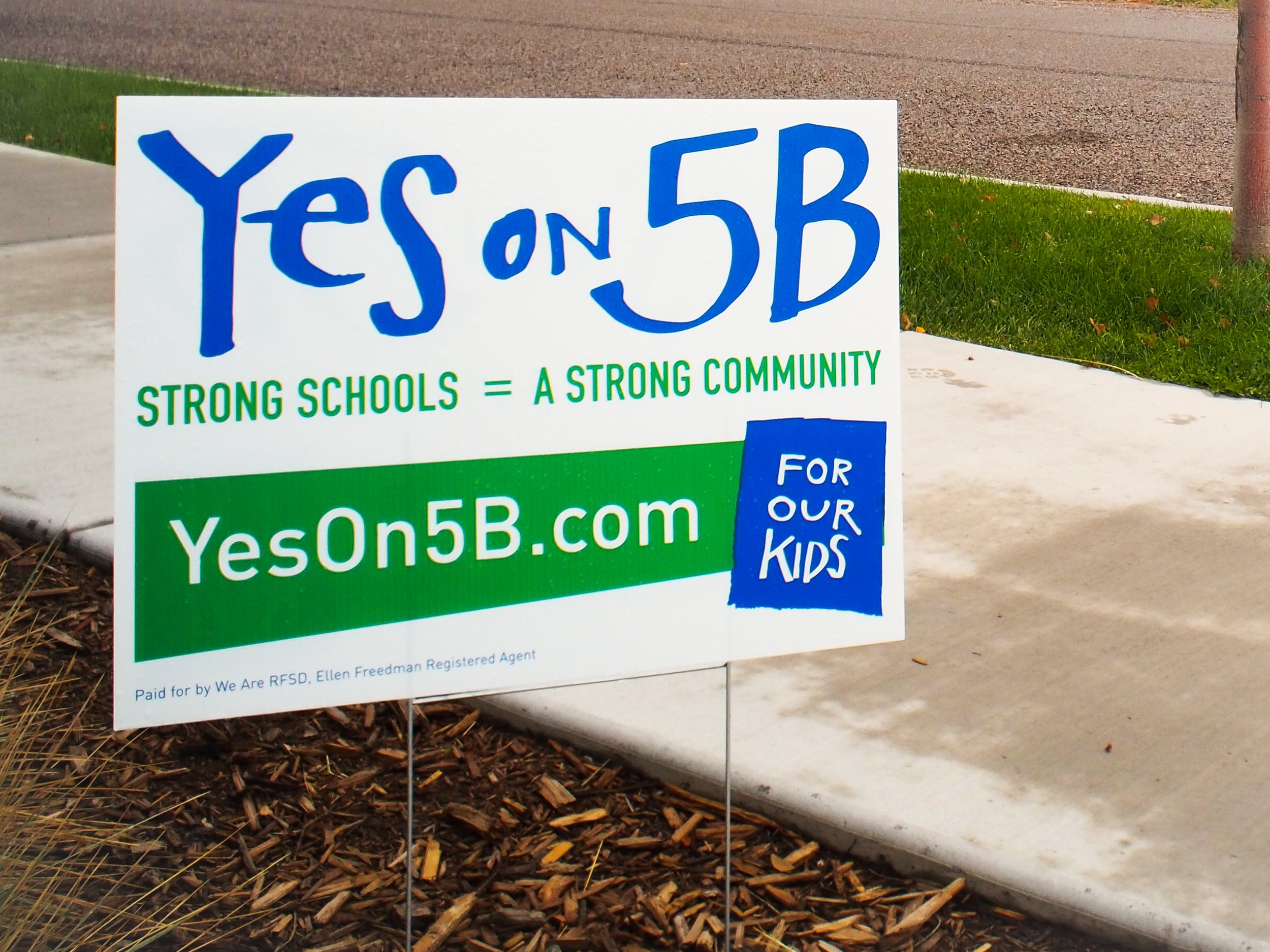 Another sign of the season, with ballots in the mail, yard signs are proliferating along streets ahead of the Nov. 2 election. Photo by Raleigh Burleigh.

Basalt Finance Director Christy Chicoine presented the Town’s First Draft of its 2022 Budget at the Town Council meeting Tuesday night, detailing how Basalt would spend its combined revenues and fund balances of $49,317,017 and stay out of the red. Chicoine called the 71-page budget “a pretty robust document for the public,” and said it was “built for transparency.” Colorado law requires that budget managers submit proposed budgets to their governing body by October 15. No other action is required until the final budget comes up for approval at the Town Council’s meetings on November 23 and December 7, Chicoine said. The entire 2022 draft budget is available on the Town’s website.

In a letter accompanying the document, Town Manager Ryan Mahoney stated: “The Town’s finances are healthy and priorities are focused on provision of services, asset maintenance and capital investment.” Two notable expenditures cited were $500,000 budgeted for “total green funding,” and $360,000 for the arts. As a revenue source, Councilor Gary Tennenbaum said “it was disappointing that we are raking in the dough” from the Town’s tobacco tax, which is two dollars per pack of cigarettes and a 40 percent tax on other nicotine products. Tobacco taxes brought in about $1 million last year that can be spent on substance abuse counseling in schools and for adults, Chicoine said. Two other items budgeted for 2022 are the purchase of land for a new police building, and a 7.5% increase in water rates. Mahoney said it would be the first rate increase in three years and was needed to keep pipes and storage in good working order.

While Chicoine and Mahoney painted a pretty picture of the Town’s finances, one uncertainty is whether Basalt voters will approve the Basalt Forward Program’s Ballot Initiative 3A on Nov. 2. The ballot initiative asks voters to raise the Town’s debt by $18,000,000 to finance three major projects: affordable housing development, a total makeover of Midland Avenue’s streetscape and infrastructure and provision for “green” projects such as solar development and vehicle charging stations. “The ballot request is looking to extend the current property tax from 2001 and 2013 bonds, and therefore would not be an increase over the tax dollars collected currently,” said Chicoine.  The Council unanimously passed a resolution in support of 3A.

The Town Council also voted unanimously to back the Roaring Fork School District (RFSD) Ballot Issue 5B, a mill levy override. RFSD Superintendent Rob Stein said he was addressing the Council as a private citizen in urging them to back the 5B ballot. RFSD has the third highest cost of living of the 178 school districts in the state, Stein said. “But we rank in the bottom one-third for pay,” he reported. “We have to pay a living wage to our teachers to keep them.” Stein said there were 60 unfilled teaching positions when school began, and that bus driver shortages mean that drivers have to double up on shifts, and children might wait an hour for a school bus. “Other employers who have shortages can raise their prices, but we have to go to you and ask for tax increases,” he continued. If passed, 75% of 5B’s mill levy, up to  $7.7 million, would go directly to paying teachers and staff, said Stein. “The superintendent and his staff won’t see a penny of it.” The other 25% would be used for recruitment and retention of teachers, staff and students.

In the public comment portion held at the beginning of each Town Council meeting, Kenny Teitler, a candidate for a seat on the RFSD School Board, asked whether the Town Council could endorse him; it could not. Basalt resident Greg Shugars complained about Basalt’s definition of affordable housing, saying it was too high. He compared a simple one-bedroom apartment with no amenities that rents in Basalt for $2,000 a month, to a luxury one-bedroom penthouse with many amenities in Philadelphia’s best neighborhood that rents for $2,285. “If you’re not shocked, you should be,” he told the Council.

Chris Leintz, who said he has lived in Basalt for 48 years, criticized the failure of the Council and Town staff to enforce wetlands protection regulations in his neighborhood, where he said five or six homeowners have been destructive. “They’ve done things with no permitting whatsoever,” he said. “Make these offenders remove their offenses.”

The Council’s public meeting room emptied before Chicoine’s budget presentation, leaving only The Sopris Sun and Grassroots Community Network in the audience.